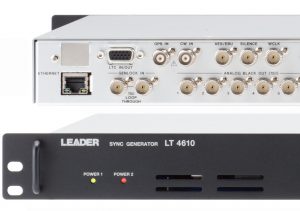 Leader Electronics Corporation has announced two expansion modules for the LT4610 sync generator. Both modules will be introduced at IBC 2018, Amsterdam, September 14-18, where Leader will be exhibiting on stand 11.B27.

Designed for use in broadcast studios, mobile production vehicles, post-production companies and broadcast equipment maintenance facilities, the Leader LT4610 provides a wide range of capabilities within a 1U x 400 mm deep footprint.

The new LT4610SER03 Precision Time Protocol option can operate as both a grandmaster or slave clock. It supports ST-2059-2, AES67 and General profiles, and incorporates 10Gb Ethernet (SFP+) and 1Gb Ethernet (RJ-45) interfaces. This option enables the LT4610 to operate in a hybrid IP and SDI environment, allowing all systems to be accurately timed to the same source reference.

Also new, the LT4610SER02 12G-SDI option adds four extra outputs comprising 12G-SDI, 3G-SDI, HD-SDI and SD-SDI respectively. A new pattern scrolling feature can be set to operate in any of eight directions. The speed can also be adjusted. A moving box of any chosen size can be overlaid on the display. ID characters can be overlaid in any position, scrolled horizontally or displayed in a blinking state for checking whether a display is frozen. Up to eight customer-sourced 4K resolution images or test patterns can be ingested and stored in the module’s internal memory. Pattern and phase timing can be set independently for each output except in the case of 3G-SDI level B and HD dual link which are available on up to two channels. Up to 32 channels of embedded audio signals can be superimposed.

These modules complement the existing LT4610SER01 GPS option which adds a GPS sync input, 10 MHz CW sync input and timecode input/output functions. The timecode generator can be then synchronised to the internal clock or to GPS time information. It can be used to create ancillary linear timecode and AES/EBU-embedded timecode synchronised to GPS time information. A holdover function holds the phase and frequency of the output signal so that measurement stays in sync even if the source reference is lost.

The LT4610 features a wide range of pattern generation capabilities including 100% and 75% chroma bars, multi-format chroma bars and SDI check fields with user-selectable scrolling in eight combinations of up/down/left/right. Scrolling speed is user adjustable from 1 to 256 pixels or lines. Y/G, Cb/B, Cr/R components can be turned on or off independently for each output channel.

QVGA (320 pixel x 240 line) 24-bit full colour bitmap logos can be transferred to the generator via USB memory and added to any test pattern. The LT4610 can also generate identifiers of up to 20 characters for placement at any operator-assigned screen position. Size is selectable between 32 x 32, 64 x 64, 128 x 128 and 256 x 256 pixels at 100% or 75% intensity, continuous or blinking. IDs can be scrolled to the left or right. Safety area markers can be generated to show safe-action area (90%), safe-title area (80%) and/or 4:3 aspect ratio. ID characters, logo mark, safe-area markers and test pattern can be displayed individually, sequentially or simultaneously.

The LT4610’s audio test generation capabilities include silence, 400 Hz, 800 Hz, and 1 kHz at -60 to 0 dBFS in 1dBFS steps, assignable across up to 16 channels for 3G-A/HD/SD and 32 channels for 3G-B. Audio sampling resolution can be selected from 20 or 24 bit at 48 kHz and synchronised with the video signal. Audio clicks can be generated between 1 and 4 seconds or disabled.

Test patterns with synchronised audio can be generated for lip sync checks. The audio click setting is disabled in this mode. SDI output 1 is synchronised to the AES/EBU output.

The LT4610 has a genlock input and can be synchronised with NTSC/PAL black burst or HD tri-level sync signals. Six independent analog black burst reference signals are provided; these can be changed to tri-level sync. A 48 kHz word clock output and 48 kHz AES/EBU output are also provided for synchronising audio signals.

Standard support for SNMP via Ethernet makes it easy to integrate the LT4610 into a network environment. Alarms are generated with SNMP and displayed on the front panel when errors do occur.

A redundant power supply with fast automatic switchover is included as standard.