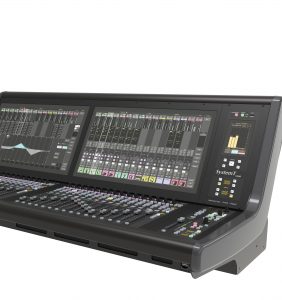 The S300 compact broadcast console is a fixed layout control surface in 16+1 and now 32+1 fader versions that can be combined with any System T network objects (control, Network I/O, and processing engines), as part of a larger installation, or in stand-alone configurations for smaller broadcast facilities or OB.

Complete showfile compatibility between all System T consoles and controllers means production can easily move between control rooms within a facility, or an S300 can very easily be used as a backup surface to a larger S500. Where processing engines are of different sizes SSL’s compatibility mode allows the pre-selection of channel, busses and effects resources that will be inactive on the smaller processing engine. Settings from the larger device are never lost and resources can be reassigned at any point during the show, even with audio passing.

Broadcast music production and post production environments in particular will benefit from the introduction of TCM1. The unit features standard LTC (XLR) and MIDI (DIN) connections, as well as two additional USB ports and two 25-way GPIO ports (12 GPI and 12 GPO) – all connected to System T via USB.

The SSL GPIO 32 provides a comprehensive solution to GPIO over Dante with 32 GPI and 32 GPO lines and redundant network connectivity via primary and secondary Ethernet connections on the front panel.