IBC 2019 Reflections: Qumulo’s Molly Presley and Eric Scollard on the Power and Popularity of All-NVMe for File Storage

Over the past year, the M&E industry has begun to more fully embrace NVMe (non-volatile memory express) storage, as the price of the technology has dropped and content creators look to accelerate their data-transfer speeds. For several years, the next-gen technology has been a major point of emphasis for Qumulo, which now finds itself in prime position to take advantage of the accelerating NVMe adoption. At IBC this month, Qumulo highlighted its P-Series All-NVMe Performance Storage, its latest cloud and hybrid-cloud solutions, and a new AI-focused API integration with axle ai. 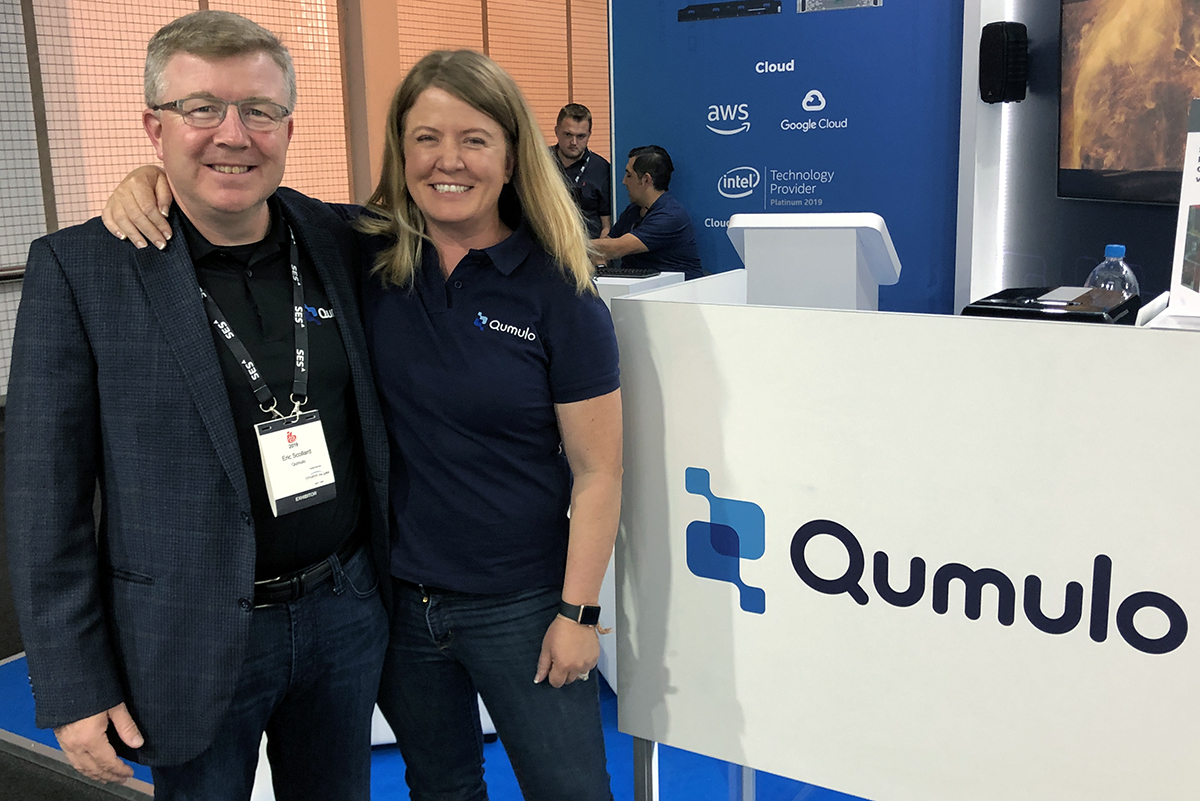 SVG sat down with Global Product Marketing Director Molly Presley and VP of Worldwide Sales Eric Scollard to discuss the explosive growth of all-flash storage and NVMe they’ve seen in the M&E market over the past six months, as well as what the company’s integration with axle ai asset-management software means for its customers.

How much have you seen the use of all-flash storage and NVMe grow recently and what do you think is the cause of this growth?
MP:
The main reason we’ve seen this [increased NVMe usage] is that the price of NVMe dropped about 30% during the first quarter of this year. So it’s almost the same price as SSDs. So, at that point, why not move to NVMe? You get much lower latency and the responsiveness is much better even for play-out types of environments. You get a more predictable performance at much lower rates.

ES: In the last 90 days, more than half of our bookings are now all-flash. The economics have shifted. We’ve known since day one that ultimately flash or NVMe was going to be a media technology that people were going to want, but it was just a little too exotic. But we are now getting to a place where it can be applied to file use cases that traditionally had been served by disk. Sure, it’s still a bit more expensive, but it’s coming into a price range now where it’s a legitimate option for users that want to start their new environment on something more modern and then grow with it. It’s gotten to that level of affordability. When price dropped on NVMe, adoption skyrocketed. People always wanted it, but when you ran the numbers, it was a luxury. But right now, NVMe is by far the fastest growing part of our business.

Why do you believe Qumulo is in a prime position to take advantage of this increased adoption?
MP:
We are the only solution out there that offers all NVMe for cross-protocol NAS. So, if a customer needs both NFS and SMB — meaning they have Mac, Windows, and Linux clients — we’re the only all-NVMe solution out there for it right now. So we are seeing a lot of new customers coming over to us for that reason.

ES: Qumulo is in an interesting position because we literally built this product from the very beginning anticipating that flash would ultimately be the dominant media type. Our very first product was all-flash and everything we’ve done since has been built on flash. And we’ve been anticipating this shift to NVMe for three years, since we brought out our NVMe array. And yes, things were slow at the beginning just because the price point was as much as 10X. But that cost is coming down and the density of the NVMe drives is getting into the 8-16 terabyte form factor. So now when you can put 200 TB [of media] in 2RU, then things start to get really interesting.

How do you see this increased adoption of NVMe and flash impacting the sports market specifically? Do you foresee sports-content creators increasingly shifting to these technologies in the near future?
MP: Specifically in the sports-video space, [NVMe] is eliminating the need for a SAN in order to offer the performance that you need. In the past, the only way you get the performance you need in the sports-video market is with a SAN, but now that we can bring down the latency, increase in performance, have concurrent streams, and all those different things, it is making it less and less necessary to have a SAN.

ES: I think use cases for SAN are really narrowing right now. SAN has always been expensive and complicated, but that was the only thing that could do the job you needed. As soon as you could show [users] a way that they can get the job done with something simpler, faster, and more economic, they’re going to jump at the chance to switch. The underlying technology is finally coming into shape with 100-GB networking.

We’ve been concentrating on building great software and great file systems and then letting the hardware catch up. We’re really reaching that point. We were out here with this NVMe product for the past three years and we would sell some here and there, but we are seeing a huge uptick in interest in the past 5-6 months. The biggest deals we’re going to do this year are definitely going to be all NVMe video, so it’s pretty exciting.

Can you tell me a bit about the new API integration with axle ai?
MP: Axle ai has integrated all these AI engines into their media-management tool. And we are integrating that with the API in our technology that [leverages] our real-time architecture. That means that when customers conduct an administrative task, they want to look at who’s using how much performance or capacity — we can do that all in real time without having to do a file system scan.

Axle has this ability to do AI on existing storage. So if you have petabyte of content and you want to assign transcription and facial detection to all your video, most AI engines would need to read it off, run it through the engine, re-process it and then rewriting it. However, Axle can do it in place. So we are having them tie to our API so that anytime there’s a file change or a new file, we’ll just notify them and they’ll automatically run the AI against it and assign that metadata.

How you see this axle ai integration benefitting Qumulo customers in the near term?
MP: We’ve heard a lot of cool things that AI can do over the past few years, but not many have been widely adopted so far. If you have 10 years of footage, you’re not going to go write it and re-read it in order to [leverage that AI]. But if you could do it in a place, that becomes really interesting. The problem with AI can be that if you have to scan your entire file system and look for changes every week or so, that’s totally impractical. But we can couple our real time analytics so that their scans are based entirely on when changes occur. What makes Qumulo unique in this case is that all the other file systems out there — SANs and NASs can’t do this at an API level — you would have to do a file system scan. Our new modern architecture is what makes it possible.