Panasonic’s NAB presence offered up some new twists, including a Smart Studio facility that made great use of automated production and AR technology as well as an 8K ROI camera system that shows an application of 8K that can make sense in an HD and 4K world. 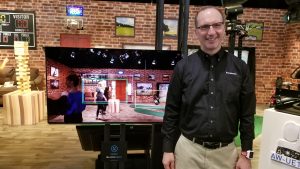 “From a business standpoint we are trying to expand and get into a system sale that builds on our relationships with our customers,” he says. “And we also want to deliver a whole system rather than just a component of the system.”

The Smart Studio on display at NAB involved a Panasonic UE150 4K camera operating in HD mode so that the 4K resolution could be used to provide intelligent zoom with full HD resolution (and two views can be cropped out of the same camera). The UE150 was mounted on a Technopoint dolly that was built around PTZ cameras and is also compatible with BlackTrax real-time tracking (which in the demo would track the talent as they moved around the Smart Studio). The Technopoint was also able to drive PTZ data to a Brainstorm AR system which was able to provide augmented reality virtual graphics in the studio.

The Smart Studio was one example of how Panasonic is looking to use the extra pixels in a 4K image to drive HD workflows. Another example was Panasonic’s 8K ROI system coupled with a PL mount which allows for even more pixels to be thrown at HD problems. A single 8K camera can be used to capture a complete field of play and the Panasonic system allows for multiple HD areas of interest to be independently controlled so that the single camera can do the work of multiple HD cameras.

“It solves all kinds of problems and can cut down set up time and reduce the number of seat kills needed [to place cameras in a venue,” says Bergeron. “We are also working with Fletcher on a three-camera system where a Fletcher controller can drive the zoom, pan, and tilt and pull the equivalent of six or nine camera angles [from the three cameras]. That then is run into a switcher so that you can produce a show that looks like it has a large number of cameras.”

Panasonic also displayed a prototype of its first 4K camcorder for the P2 format.

“We have an imaging platform that fits very nicely into the camcorder format and there are a lot of applications that are looking for 4K,” adds Bergeron.