AMC Iberia ties up to Marina for new 4K channel 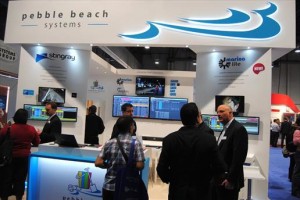 AMC Networks International Iberia, the largest producer of thematic channels in Spain and Portugal, has chosen its Marina automation solution for one of the first 4K channels to be launched in Spain this autumn. Based in Madrid, AMC currently operates a portfolio of 23 television channels, reaching over 19 million viewers throughout the Iberian Peninsula.

With a reputation for innovation and embracing new technology, AMC Iberia has a long history of working with Pebble Beach Systems, having deployed the company’s first generation Neptune automation system to support its existing channels. As AMC Iberia prepared to launch a new 4K channel, they worked with Madrid-based systems integrator Datos Media Technologies and decided to expand their existing relationship with Pebble Beach Systems and install the next generation Marina solution.

“Marina will control a Spectrum X server from Harmonic in a fully redundant configuration at AMC Iberia,” said Ramón Juvé Chief Engineer from AMC. “Marina’s proven integration with Harmonic made it a clear choice for everyone.”

“We have relied on Pebble Beach Systems automation solutions for over eight years. Our experience so far has been extremely positive and it only made sense for us to install their next generation automation system for our next generation channel,” said Cosme Rubio,Technical Director at AMC Networks International Iberia.