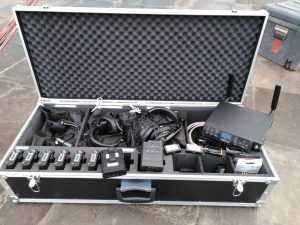 These two LaON wireless systems will be used to complement and expand the intercom system by expanding the possibilities of mobility and coverage. Canal Sur especially values the system’s ease of use and configuration, the reliability of communication and the excellent quality/price ratio.

The LT750 is the biggest stand-alone system in the LaON products portfolio and comes with a 1RU base station and offers up to 128 beltpack and up to 10 remote station connections.

One of the two systems, Canal Sur has in use, consists of the LT750 base station with 4 beltpacks and one RBS repeater, has been installed in the Canal Sur studios in San Juan de Aznalfarache, improving their internal communication with camera- and additional staff. Each of the beltpacks uses full-duplex audio channels with different groups of communication for the teams. The second LT750 system consists of eight beltpacks. Configured as a stand-alone system and integrated in flytcases, the second system is used according to Canal Sur’s specific needs of wireless communication during productions in different events with OB Vans and retransmissions.

LaON wireless intercom systems are distributed by Broadcast Solutions’ branch Broadcast Products and work in the 5GHz UNII band frequency. They provide approximately up to 29 RF channels, depending on the regions as opposed to three channels on 2.4 GHz ISM band. The systems stand out due to less than 23 ms latency and 7.2 kHz audio frequency response, guaranteeing a wired-like high-quality audio performance with extra clarity.