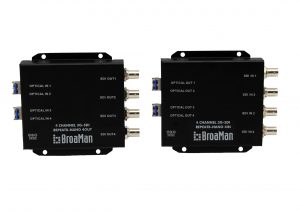 This year’s IBC show saw BroaMan launch of one of its most significant solutions yet: the Repeat8-NANO. The smaller brother of the well-established Repeat48, the device is being positioned as the most modular and flexible system on the market, offering ultra-fast electrical-to-optical, as well as optical-to-electrical conversion.

This complete, plug ‘n’ play, 4K fiber transport comes in a single box and is therefore ideally placed for facilities requiring simple 4K transmission. Many efforts have been spent to place the device at a low price point, while at the same time maintaining Broaman’s customary highest technical performance.

This, in turn, has also led to a large price reduction in the bigger brothers, the Repeat48 and Repeat48WDM.

Both devices can be connected with a quad or duplex fiber, creating robust and cost-efficient four-channel point-to-point transport. Each box can also be connected to the larger Repeat48 or even to the Route66 for distant router I/O.

Explaining the rationale behind the new device, BroaMan Maging Director, Tine Helmle, said: “Following the success of the Repeat48 series we realised there was a high demand for a smaller box, that was not necessarily rack mounted.

“There are plenty of small converters in the market, but few 4-channel modules which are perfect for simple 4K transmission. We reduced the channel count and size from the original Repeat48, but have maintained the same highest quality. The price / performance ratio is amazing. At the same time, we could move the larger Repeat48 and Repeat48WDM to a much lower price point. I’m very pleased.”

Extending 4-channel 3G-SDI signal up to 80km over fiber optic cables, this quad channel converter also boasts low power consumption and a number of other features. It offers Data rate per channel up to 3G, totalling up to 12G for 4K. It includes Reclocker for superior jitter performance. Compliances include SMPTE-424M, SMPTE-310M, SMPTE305M, SMPTE297M, SMPTE-295M, SMPTE292M, DVB-ASI and MADI.

In addition it offers: Transparent to Embedded Audio (up to 192 channels); Full compatibility with BroaMan Repeat48, MUX22 and Route66 devices to enable larger facilities to build advanced and complete systems (up to 120km); Seamless integration with many leading pro audio and broadcast brands. Finally, it is the most modular and flexible system on the market, with no additional software required.

Contained in metal housing for superior EMI performance, the Repet8-NANO comes with the standard five-year warranty.