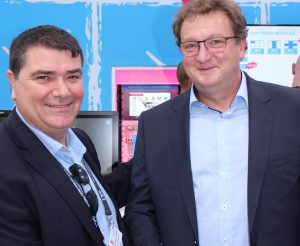 National public broadcaster CBC/Radio-Canada has chosen the Lawo VSM as the master IP control system for its new Montreal Broadcast Center, a facility that will be fully compliant with the SMPTE 2110 standards for professional media over managed IP networks.

The contract was finalised at IBC in Amsterdam, capped with a handshake between Francois Vaillant, executive director, Engineering Solutions at CBC/Radio-Canada, and Lawo CEO Philipp Lawo.

The planned 39,000 sqm (418,000 sq. ft.) Montreal broadcast facility will host several production areas dedicated to news, TV and post-production activities, fed by dozens of studios, control rooms, editing and infographic workstations and audio mixing suites. Its Master Control and Playout Room is designed to host 40 TV channels, 40 Web channels and 160 Radio channels. The control and management of this broadcast infrastructure, and accompanying integrated technical resources, is based on Lawo’s VSM.

“This move documents the innovative character of the Canadian broadcast industry in applying ST2110 standards to ensure ultra-reliable IP workflows,” said Lawo CEO Philipp Lawo. “We are honoured and proud that our VSM system has been chosen by CBC/Radio-Canada to be the overall control system for the technical IP infrastructure of a complete new broadcast facility of this size and sophistication.”

CBC/Radio-Canada’s broadcast channels reach an estimated monthly audience of 14 million consumers. The new Maison de Radio-Canada (MRC) will be a showcase for Canada’s public broadcaster, with open, welcoming and inviting public spaces for both visitors, and the employees who work there every day.