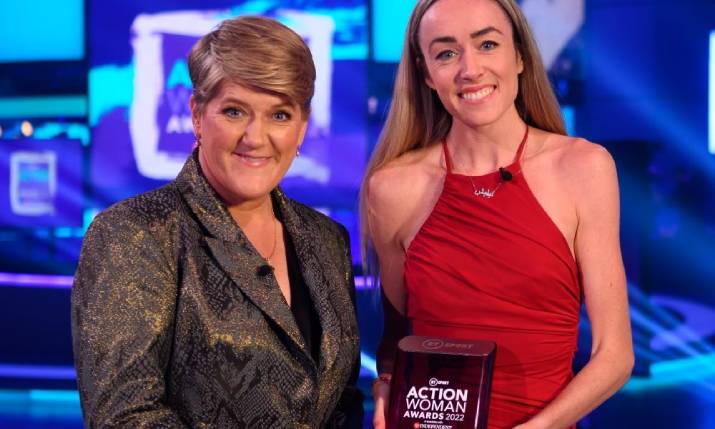 Eilish McColgan has been named BT Sport Action Woman of the Year to conclude an outstanding roster of achievements for the 31 year old Scottish athlete.

The middle and long distance runner from Dundee has had a monumental year. McColgan claimed the first major title of her career at the Commonwealth Games in Birmingham, winning gold in the 10,000m in a new Games record time, beating the mark set by her mother 32 years earlier. She then made history with silver in the 5,000m; Scotland’s 500th overall medal at the Commonwealth Games.

This unforgettable achievement held a deeper significance as she became the first British distance runner to compete in six championships outdoor finals in the same season.

McColgan was presented the award at the annual awards show hosted by Clare Balding in front of a star-studded audience to celebrate this year’s standout performances by British athletes.

The Lionesses were named the Team of the Year, signalling an immense victory in football and shifting perceptions of the elite women’s game. The England women’s national football team made history this summer by winning the UEFA Women’s Euro, marking the first time since 1966 that any England senior football team had won a major championship.

Sue Barker CBE received the Lifetime Achievement Award in recognition of her services to tennis and broadcasting. Having played tennis at the top level, winning a Grand Slam title at the French Open and reaching the Wimbledon semi-finals, Sue expertly transferred her skills to the world of sports broadcasting. She has been hugely popular and versatile, presenting Grandstand, the Olympics, Winter Olympics, the Grand National, Sports Personality of the Year and of course Wimbledon for 30 years.

BT Sport presenter Clare Balding said: “2022 has been a beacon of a year for women’s sport across the board both for teams and individuals. Each one of our nominees has paved the way for a new generation of female athletes, who will one day follow in the footsteps of the role models we celebrated tonight.

“Sue has been an inspiration to me and she has helped pave the way for the many female sports presenters, reporters, commentators and pundits who now have a chance to shine. She is bowing out at the very top of her game and it’s been a privilege to work alongside her for so many years.

“It has been a joy to recognise and relive all these achievements with BT Sport with the Action Woman Awards.”