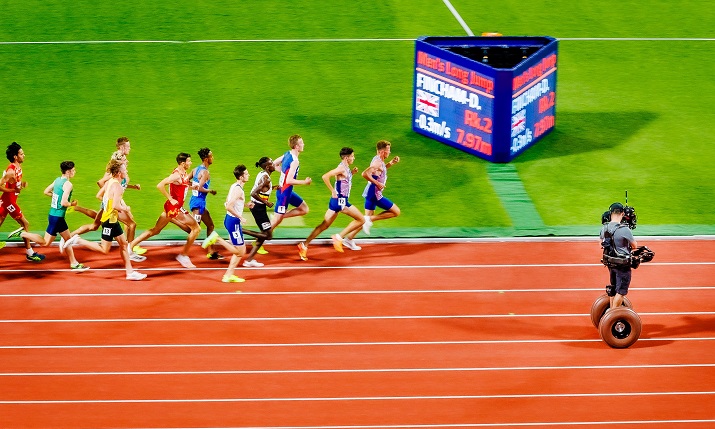 Riedel Communications provided the Munich 2022 Local Organising Committee (LOC) with communications, broadcasting, and event IT support for the European Championships 2022, which took place from 11 to 21 August in Munich, Germany. Riedel technicians laid more than 1,600 kilometres of fibre to establish a robust network infrastructure for the event, while the company’s MediorNet distributed AV platform delivered signal routing and processing and its Artist digital matrix and Bolero wireless intercom systems provided reliable communications for production crews.

Bringing together the existing championships of Europe’s leading sports into one multi-sport event — the largest to take place in Germany since the 1972 Summer Olympics — the European Championships featured more than 4,000 athletes from 50 countries competing in 175 medal events across nine Olympic sports. The 11 day event — for which the LOC served as the host broadcaster — was held at the Olympic Park in Munich, in addition to other locations throughout the city, including the Königsplatz and Odeonsplatz. The official opening, unlike typical opening ceremonies, was a colorful festival that brought acts like Marteria and Moop Mama to fans and sports enthusiasts from Munich and beyond, free of charge and right in the city center.

“The LOC had very ambitious goals regarding the championships’ visibility and audience engagement on-site in Munich, as well as for the millions of viewers at home, while keeping a close eye on available budgets. But with our flexible and scalable MediorNet IP and Artist combination, we managed to implement a cost efficient unified solution for data, intercom, video, and audio, connecting all venues into one overarching network,” said Marc Schneider, executive director global events, Riedel Communications.

Felix Demandt, senior project manager at Riedel, added: “For the European Championships 2022, Riedel technologies supported communications, broadcast, and IT, all of which were equally important — as none of these areas works without the others — and running on the same infrastructure. So, no matter how production staff exchanged information — talking via intercom, sending signals from point A to point B, using the internet, or simply printing out a schedule — our solutions were involved.”

At the Olympic Park, Riedel distributed three 10Gbit internet lines to production, media/press, and commentary areas, while providing a WLAN with over 300 access points. For production crew communications, the company installed an Artist digital matrix intercom network consisting of 10 Artist-64 and 11 Artist-1024 intercom nodes, with 450 SmartPanels for control located throughout various control rooms. The Artist platform integrated seamlessly with Riedel’s Bolero wireless intercom system, which consisted of over 400 Bolero wireless beltpacks and 168 antennas in the event and host production areas. In addition, 2,500 radios were used in the production, which Riedel supported by installing nine TETRA radio systems.

Riedel’s MediorNet installation was the heart of signal distribution for the European Championships. The system consisted of over 250 nodes including MicroN and MicroN UHD devices, in addition to 11 VirtU frames for media signal processing and SDI-to-IP conversion. Centrally controlled from the Technical Operation Center (TOC), the system was used to supply rights holders in the International Broadcast Center (IBC) and Olympic Park venues with signals. In addition, unilateral signals and host lines were transmitted to external venues, which were redundantly connected via Dark Fiber. Four Riedel technicians were on-site at each of these venues to handle event production for spectators.

“Bringing the European Championships together was a massive undertaking that we began planning for over a year and a half ago and took a team of 96 employees in Munich to pull off,” added Demandt. “The IT backbone for communications alone consisted of over 600 switches and 20 to 25 MediorNet nodes were required in each venue, with larger venues requiring even more. In addition, configuring the Bolero system and Artist SmartPanels was a huge task to manage in advance.

“Fortunately, our systems were connected to the Riedel Operation Center (ROC) in Wuppertal, which provided us with access to additional know-how and resources from our headquarters. And the results speak for themselves. The event was a huge success for the LOC, and we were able to provide production crews with reliable communications and internet connectivity, while bandwidths of 200Gbit offered broadcasters exceptional flexibility in delivering the event to spectators at home,” he concluded.