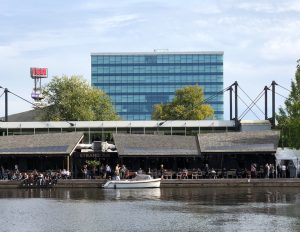 The Beach at the Amsterdam RAI during IBC 2018

“Exhibitor staff are mainly confined to one show booth which is extremely restricting except on the last day of a show when they tend to break free and start networking,” commented Finepoint Broadcast hire manager Clive Northen. “Participating as a delegate provides much wider opportunities for one-to-one meetings. We pre-arranged meetings with many of our largest customers in the outside broadcast sector. A lot of big sporting events are scheduled for 2019 including the June to July FIFA Women’s World Cup football championship in France and the September Rugby World Cup in Japan.

“IBC also proved a very useful opportunity to get to grips with latest generation high-end production equipment. Particularly impressive was Canon’s new UHD Digisuper 122 box lens which is claimed to have the world’s widest angle and longest focal length. It can operate from 8.2 mm wide to 1000 mm at full telephoto, or 2000 mm with 2x extender. Also introduced was the Canon CJ25ex7.6B zoom lens for 2/3-inch-sensor broadcast cameras. This has a zoom ratio of 25x and a 7.6 mm to 190 mm focal length range.

“Among new cameras was Sony’s new HDC-3000 series. Top of this range is the HDC-3500 which has three 2/3 inch CMOS sensors plus support for 4K, HD, HDR and IP. Also designed for the HD/UHD hybrid world is the new EVS XT-VIA live-replay server. This can process six channels of 4K UHD or 12 channels of 1080p HD, including high dynamic range. SDI and SMPTE 2110 IP are fully supported.”

“Canon demonstrated its first XF-HEVC compatible camcorder, the XF705,” added Finepoint Broadcast’s new equipment sales manager Richard Baker. “A compact handheld/shoulder model, it can record 4K UHD/50P 4:2:2 10-bit HDR files to SD cards. It can also output uncompressed UHD via 12G-SDI or deliver a 4K IP Ethernet stream. The lens is not interchangeable but offers a very wide 15x zoom range in UHD or 30x if you are shooting in HD. Anticipated price point is about 7,000 euro with first deliveries expected around December.

“A continuing trend both at Integrated Systems Europe back in February and at IBC2018 was the narrowing gap between the aspirations of broadcasters and high-end corporate video customers. Broadcasting itself is also becoming easier than ever thanks to internet delivery getting more reliable and cost-efficient with every passing year. In short, IBC2018 fully reflected the highly competitive but also very buoyant broadcast industry which it serves.”