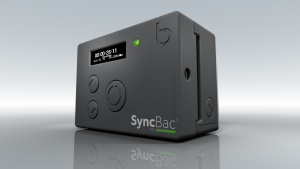 Timecode Systems’ SyncBac PRO, introduced at this year’s NAB show in Las Vegas, is now shipping. The new, wireless, embedded timecode sync solution for GoPro HERO4 Black and Silver cameras is now in stock and available to buy throughout the company’s international network of resellers.

“SyncBac PRO has definitely attracted the attention of the broadcast industry since we launched the product in April,” said Paul Scurrell, CEO of Timecode Systems. “As well as being one of the first GoPro accessories to be verified by the Works with GoPro initiative, SyncBac PRO has also won an IABM Game Changer Award, and we’ve been flooded with requests from production teams eager to use it on their shows. We knew that synchronising GoPro footage was a struggle in the professional film and broadcast world, but we’ve still been astonished by the huge demand for SyncBac PRO.”

As television has evolved, the expectations of the viewing audience have increased, creating the demand for more multidimensional content. As a result, professional production teams are increasingly using GoPro cameras to help them capture multiple points of view.

However, as popular as GoPro HERO4 Black and Silver cameras are in the broadcast world, they aren’t specifically designed for professional use in television production — so integrating footage into the edit workflow has typically been a time-consuming, manual process. Clipping a SyncBac PRO to these cameras solves the problem. By enabling the GoPro to generate its own frame-accurate timecode, the SyncBac PRO gives the ability to wirelessly timecode sync multiple GoPros with pro cameras and pro audio devices over long-range RF.

“We completely understand and appreciate how important this particular product is to our customers. The ability to timecode sync GoPros is something the professional broadcast community has been crying out for,” said Scurrell. “As a result, we had to be 100 percent certain that SyncBac PRO would deliver on our promise to dramatically simplify the process of editing GoPro content by enabling footage from these cameras to easily integrate into the professional broadcast production process.”