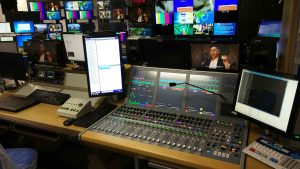 Inside the newly Calrec-equipped TVB studios in Hong Kong

TVB, the largest broadcaster in Hong Kong, recently purchased two Artemis Beam and one Artemis Light consoles as part of its continuing audio technology upgrade. The latest installations bring the total of Artemis consoles at TVB to eight.

“We used Calrec Alpha consoles in our studios for many years and were very impressed and happy with them so upgrading to the Artemis was an easy choice for us given our legacy with Calrec products. What we love about the Artemis is that it gives us industry standards like multi-format audio and loudness for a truly modern workflow,” said Mr. Law Yui Wah, studio production department/assistant manager at TVB Hong Kong.

TVB Hong Kong is using the new Artemis consoles for a variety of programming including Miss Hong Kong, Hong Kong Ruby 7, and the International Chinese New Year Night Parade. This is in addition to 24-hour news and live sports use. The installations were handled by Calrec’s official Hong Kong distributor, Jolly Pro Audio.

With the Artemis consoles, TVB Hong Kong can switch between an existing 56-fader Artemis Beam in their OB van and 48 faders in their larger studio to a compact, 24-fader Artemis Light for their smaller new studio. Staff members move between studios with exactly the same workflows.

“Broadcasters are increasingly looking to streamline their audio, particularly in Hong Kong. This is an important region for us, with TVB Hong Kong being a major player and a venerable customer of ours. We’re delighted that our Artemis consoles are giving them the satisfaction and production value that they were looking for as they continue to make high-quality broadcasts,” said Anthony Harrison, international sales manager, Calrec.