IBC 2019: ENCO to highlight automated captioning for video and radio

ENCO (stand 8.A59) will showcase the latest innovations in its enCaption4 automated captioning system at next week’s IBC2019 exhibition. Highlights will include brand-new capabilities for television broadcasters and video producers – including major advances in intelligent punctuation – alongside the European debut of tailored configurations that bring the platform’s powerful benefits to the radio domain. 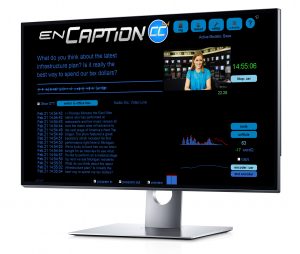 From Strength to Strength

enCaption4 is well known for enabling broadcasters, OTT service providers, AV professionals and content producers to automatically and cost-effectively augment their live or pre-recorded content with closed or open captions in near-real-time. The newest updates further boost the already-exceptional accuracy and speed of enCaption4’s machine learning powered speech-to-text engine, improving the precision of the resulting captions while minimizing the delay between spoken words and the corresponding on-screen text.

“It may seem like we announce increases in enCaption4’s accuracy and performance at every major trade show, but that’s simply because they really do keep getting better,” said Ken Frommert, President of ENCO. “We are constantly striving to improve enCaption4 not only for the broadcasters and video professionals who use it, but also to create better viewing experiences for the consumers who depend on captions to enjoy and understand their content.”

Caption quality is further amplified with enCaption4’s new advanced punctuation capabilities, which significantly enhance the accuracy and readability of transcriptions. Available in English, German, Spanish and French, the expanded functionality now supports punctuation characters including full stops, commas, exclamation marks, and question marks. enCaption4 intelligently detects the context surrounding pauses and trigger words to insert appropriate punctuation and capitalization on the fly, helping viewers better understand not only what words are being spoken, but also how they are being said.

An enhanced scheduling interface brings operational advantages to enCaption4 users. In addition to scheduling the start and stop of captioning, operators can specify different types of content – such as sports or news – to ingest the appropriate dictionary words for each event, as well as instructing the system to grab news scripts and rundowns via MOS integration at particular times. Meanwhile, for broadcasters wishing to further minimize manual interactions with enCaption4, a new Web API opens up expanded integration possibilities for controlling the solution directly from their existing station automation systems.

Support for the WST/OP-47 standard has also been added to enCaption4’s optional closed caption encoder card, expanding the system’s caption output support for broadcasters in regions including Europe, South Africa, Australia, and New Zealand. Powered by DoCaption technology, the card simplifies signal flow and minimizes equipment by embedding captions into the SDI output without the need for a separate caption encoder.

IBC2019 also marks the first European exhibition showing of ENCO’s new enCaption4 configurations for radio stations and groups. While captioning is most commonly associated with television rather than radio, Internet and OTT delivery have created the opportunity for radio broadcasters to display corresponding text in the “listener’s” browser or app. This opens the door for individuals who are hard of hearing to enjoy content such as talk radio that was previously inaccessible to them. Automated captioning also enables immediate creation of searchable transcripts that broadcasters can post alongside recorded audio clips, enhancing SEO for their websites while improving content discovery for site visitors.

OTT and mobile users often consume content with their devices on “mute” while on trains or at work, so the availability of captions makes radio a viable new entertainment or informational option for them. enCaption4 can also turn an audio-only source into a video stream with open captions overlaid on a plain background or graphic, or combine the audio with a separate video stream while embedding closed captions for display in a web-based video player.

“A lot of great radio programming has previously been inaccessible to many audience segments because of disabilities or their media consumption environments,” added Frommert. “By bringing the benefits of enCaption4 to radio, we are breaking down these barriers.”