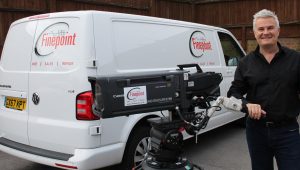 Senior managers from Finepoint Broadcast will be in Amsterdam for the annual IBC exhibition of broadcast equipment, software and services.

“IBC continues to be worthwhile for face-to-face networking and as a venue in which to try out products from upcoming innovators,” Bendig commented. “It is also useful for experiencing new technical developments before these are tested in the competitive marketplace. Production companies tend to have the strongest interest in new technology because shooting high-budget content in the best possible quality always makes long term sense.”

Added Northen: “A lot of companies in the OB sector are making their plans for the 2020 round of sports. Next year is going to be very busy with the UEFA Euro 2020 and the Summer Olympics in Japan along with our already contracted business for the UK domestic market. We will be discussing potential additions to our hire fleet with vendors at IBC and also meeting with some of our biggest clients at the show. Interest in 4K UHD continues to grow both because it is becoming more affordable and as it has obvious advantages for long term archiving.”

Said McKenzie: “The ability to make HD cutouts from 4K is attracting growing interest among production companies. The recommended technique is to capture a sports match by streaming two matched side-by-side 4K camera feeds to a control room which can be located a few metres away or on another continent. Sourcing HD cutouts from 8K is a much more attractive option than dual 4K as you only need a single camera and a single delivery channel. No synchronisation issues and no need for graphic stitching. I hope at least one of of the major camera manufacturers will pick up on this application at IBC.”

And Gill concluded: “We will also be looking at the latest developments in product areas such as OB camera lenses, camcorders, production servers and post production equipment. IBC is also great opportunity for direct meetings with suppliers and potential as well as existing customers.”