In support of the many broadcasters still transitioning from traditional SDI to IP-based systems, FOR-A (stand 2.A51) at IBC 2019 will include hybrid IP/SDI products, such as: the USF-10IP IP Gateway, the SOM-100 media orchestration platform, and the MBP-1000VS-IP video server.

FOR-A has an array of production switchers, video servers, processors and test signal generators that support both 12G-SDI/4K and 3G-SDI/HD resolution. The company is a proponent of 12G-SDI technology as an ideal format for sports and other 4K productions, because it offers reliability, ease of operation and industry-standard interfacing.

One product that serves as a bridge between IP and baseband environments is FOR-A’s USF-10IP IP Gateway series. The USF-10IP series is a 10 GbE video-over-IP module series that offers high-quality conversion of any standard IP video format, including: SMPTE ST 2022-6/7 and SMPTE ST 2110. The unit also acts as a translator between SDI baseband and IP systems and is compatible with 4K UHD (2SI/SQD) and multi-format input/output video.

An integrated baseband/IP control and monitoring system, the SOM-100 is also designed based on hierarchical architecture using Ember+ for a flexible system configuration to be used in a mixed SDI/IP environment. It delivers seamless interoperability between baseband and IP equipment and traffic management. The SOM-100 provides operation of a variety of video equipment such as SDI/IP/RS422 routers, multi viewers, video processors, tally devices and button panels, and monitored centrally from its GUI. 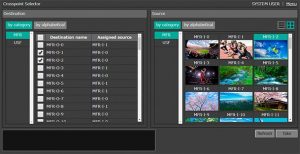 SDI and IP routing switchers are managed as one routing switcher in a virtual group. The SOM-100 can execute routing system control and process control, so that it supports collective operational changes of multiple pieces of equipment and executes time reservation. The system also features a web interface for easy access from multiple computers.

A 12G-SDI/IP multi-channel video server, the MBP-1000VS series is ideal for 4K editing environments, offering multi-input/output 4K and HD support and ingest, playout and 4K recording functionality. FOR-A is offering a range of MBP-1000VS interfaces for 12G-SDI or video over IP transmission, including 12G-SDI, 3G-SDI, and SFP+, to accommodate varying user needs for inputs/outputs and size of internal storage (SSD). The MBP-1000VS-IP includes a SFP+ port for 10 Gbps video over IP I/O. It supports up to eight-channel MPEG-2 codec or four-channel 4K XVAC codec and can switch channels from encoding to decoding as needed. Supported formats for video over IP include SMPTE ST 2022-6 and ST 2110.