FUJIFILM (stand 12.B20) has launched the FUJINON Premista 80-250mmT2.9-3.5 (Premista 80-250mm) telephoto zoom lens with a focal length of 80-250mm and which will be available in December 2019. It is the second lens model in the Premista series of cinema camera lenses which deliver the full benefits of a large format sensor with stunning optical quality. 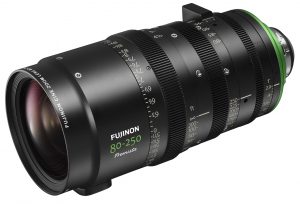 The Premista 80-250mm can be combined with the already-released FUJINON Premista 28-100mmT2.9 (Premista 28-100mm) standard zoom lens to form a kit that covers the most frequently-used focal lengths of 28-250mm, accommodating a broader variety of requirements.

In recent years, cinematographers have increasingly started to work with cinema cameras equipped with a large format sensor for motion picture and commercial production and they wish to achieve a natural and pleasant bokeh effect with shallow depth-of-field and wide dynamic range. Although there are prime lenses in the market compatible with the large format sensor, there has been a demand for zoom lenses covering a wide range of focal lengths offering versatility at the highest optical quality.

In response to these demands, Fujifilm developed the Premista 28-100mm in August 2019 by combining our world class optical and mechanical designs with the latest manufacturing technologies.

The Premista 80-250mmT2.9-3.5 is a telephoto zoom lens covering an 80-250mm focal length. Thanks to the adoption of a large-diameter aspherical lens and a new focus/zoom system, the Premista achieves stunning optical quality from the center to the corners, allowing the cinematographer to capture the feeling and texture of the subjects. The lens design contributes to wide dynamic range by suppressing unwanted flare and ghosts thanks to Fujifilm’s original optical calculation software.

The Premista 80-250mm can be combined with the Premista 28-100mm to form a kit that covers the most frequently-used focal length between 28mm and 250mm, accommodating a variety of scene changes. They share a common front element diameter and three-ring gear positions, allowing users to use the same accessories such as matte boxes and follow focus. This eliminates the need to re-adjust accessory positions when changing between these lenses, streamlining operations in frontline video productions.

Fujifilm’s first product was motion picture film in 1934 and thus the company is deeply related to the film industry. It has been almost 20 years since Fujifilm started our research and development of cine lenses in 2000. In 2017, FUJINON Cine Zoom Lenses were awarded an Engineering Emmy® by the Television Academy.

Fujifilm is introducing the “Premista” series as a continuation to the current lineup of the “HK / ZK / XK / MK Cine lenses” to meet the diverse needs of the movie and commercial production industry.