This year, JVCKENWOOD (stand 12.F31) will propose various new solutions for IP video production with the addition of the CONNECTED CAM STUDIO series, a new lineup developed for professional production. The spotlight will be on the evolution and expansion of the CONNECTED CAM series of professional camera recorders, which offer connectivity with high-resolution and high-quality images. The company will also propose an upgraded version of the GY-HM250 camera recorder, which supports Facebook Live video streaming, and a new lineup of display monitors for 4K video production. 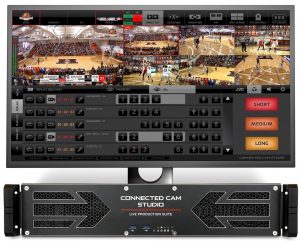 CONNECTED CAM series of camera recorders
JVC will exhibit solutions for video shooting, transmission, and streaming, as well as systems used by broadcasters in studio production centered on CONNECTED CAM, which enable newsgathering and live streaming of sports and live events on a small scale and at reduced cost, underlining the further evolution and expansion of end-to-end IP video production solutions.With expanded demand in recent years for live streaming of sports events on the web and increased distribution of event content by corporations and various groups, there is a growing need for solutions that allow a small number of people to efficiently deliver large volumes of content. In response to the needs, they will exhibit the KM-IP6000 and KM-IP4100, both of which were developed jointly with our partner Streamstar in Slovakia to meet those needs, as the first iteration of our new lineup of CONNECTED CAM STUDIO series live production suites. Both using our live production suite in combination with the CONNECTED CAM lineup of cameras and IP cameras, such as the KY-PZ100 PTZ remote IP camera, the company realizes all the functions necessary for content distribution in an Internet environment on an all-in-one platform. The KM-IP6000 supports six camera inputs and the KM-IP4100 supports four camera inputs, and both models feature HD-SDI, IP Stream, and NDI inputs. These models will have new features added in the future, such as supporting Secure Reliable Transport (SRT) protocol, a high-quality and secure IP transmission technology, and multicam synchronization on the Internet. 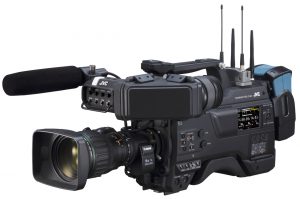 They will exhibit the RM-LP250S and RM-LP250M IP-enabled remote-control panels for controlling camera recorders over IP networks for studio production and on-location shooting sites for live streaming as the second iteration of the CONNECTED CAM STUDIO series. These products can be used to operate equipment in the studio, as well as to remotely control multiple camera recorders. The RM-LP250S supports one camera input and the RM-LP250M supports up to three camera inputs. In addition, functional assignment of buttons on the control panel can be changed freely using the configuration interface of a web browser according to the intended use.

The company will display the VF-HP900 studio viewfinder, which can be connected to the GY-HC900 HD memory card camera recorder with a single multicable in a studio configuration. This model comes with a 7-inch LCD screen featuring WUXGA (1920×1200) resolution and wide viewing angle. Camera settings can be changed directly on the LCD screen. In addition, they will exhibit the SK-J900 studio kit camera-mounting bracket, which allows flexible adjustment of camera angles and rotation (sold separately).

JVC will introduce a version upgrade to the GY-HC900 HD memory card camera recorder that was first launched to the market. With the new addition and enhancement of IP connectivity, this first iteration of the CONNECTED CAM series of camera recorders offers new features, such as the Progressive AUTO FTP function for the flexible transmission of recorded video to the FTP server at predetermined time intervals; enabling recording in Apple ProRes 422 format and making backups to long-duration recording data using the KA-MC100 SSD media adapter (optional); and, improving the live streaming function.

To meet growing demand for content streaming through Facebook Live at corporations and schools, they will release a version upgrade of the GY-HM250 4K memory card camera recorder that offers simple live streaming to Facebook Live. Connecting with Facebook Live is as easy as pairing the camera with a Facebook account, and live streaming can be started with a one-touch action without complicated network settings. In addition, this model supports RTMPS, a secure streaming protocol used by Facebook, allowing for highly reliable live streaming of content.