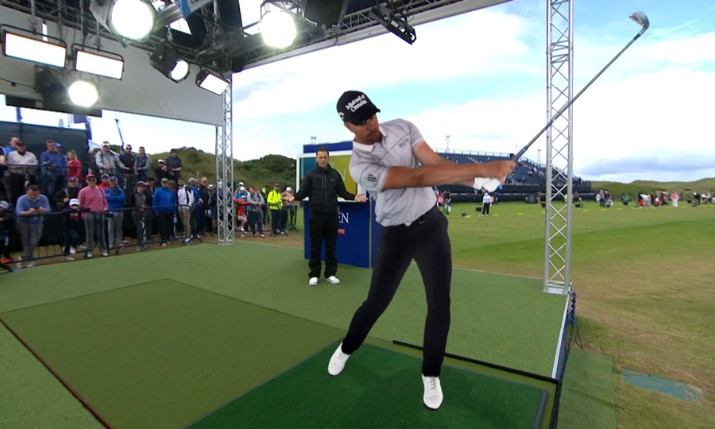 The mobile studio and volumetric capture technology used by Sky Sports to show viewers the mechanics of a golfer’s swing in 3D virtual reality will be on show at IBC 2019.

The Polymotion Stage from Mark Roberts Motion Control (MRMC) is a mobile studio that can be used for the creation of volumetric video, images, and avatars. It can be deployed in either a dome or a truck.

Comprised of 106 video cameras, it captures video at either 2K or 4K resolution. The cameras are positioned with 96 around the capture volume facing inwards, and 10 above pointing down. With multi-directional microphones, it can capture spatial audio or reference tracks to be sent to sound design.

During The Open golf at Royal Portrush in July, Sky Sports used the technology for its Sky Scope analysis (pictured, above). This saw presenter Nick Dougherty demonstrate the golf swings of Dustin Johnson and Henrik Stenson in 3D virtual reality. Read more about Sky Scope

At IBC, Studiobot and demonstrations of AI systems such as Polymotion Chat and Polymotion Player will also be displayed.

In addition, MRMC and Nikon, in Hall 12, will give a debut to the Bolt X. The rig has a 3.1m arm reach and a speed of 9.1m a second at camera. Bolt and Bolt Jr will also be on show.