Nevion (stand 1.B79) has onfirmed that its flagship software-defined media node Virtuoso has successfully passed the SMPTE ST 2110 and NMOS/TR1001 qualification testing at the August 2019 JT-NM global testing event. 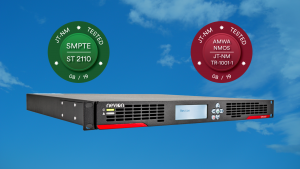 Once again, Nevion has played a significant role in the testing, having been one of the products to be successfully tested by JT-NM for SMPTE ST 2110 in March. With the latest round of testing, which took place in Wuppertal, Germany, Nevion Virtuoso has now passed the even more thorough SMPTE ST 2110 tests, as well as the TR1001 tests, which includes the NMOS control suite.

During the rigorous August 2019 JT-NM testing, Nevion Virtuoso was used as a one of the reference media nodes at the testing event. The thorough testing means that broadcasters, media organizations, service providers and other potential users of Nevion Virtuoso are assured that the product will work in a multi-vendor environment in an IP media network.

These latest qualifications underline Nevion’s commitment to standards. Since the initial parts of SMPTE ST 2110 were first published in 2017, many equipment vendors have claimed support for the standard. However, as some buyers have discovered to their costs, those claims were not always a guarantee that the equipment will work in a multi-vendor environment.

Andy Rayner, Chief Technologist, Nevion, and recently nominated SMPTE Fellow said: “We are delighted to have played a significant role in the August 2019 JT-NM testing in Wuppertal and that Nevion Virtuoso has continued to be compliant with both the enhanced SMPTE ST 2110 tests and now the TR1001 tests. We are committed to ensuring that our equipment meets the latest standards to give prospective buyers the peace of mind that these products will function in a multi-vendor environment.”