Integrated Systems Europe opened with a bang this morning as Panasonic, in its annual ISE press conference, unveiled a number of advances in large-scale 3D projection mapping. 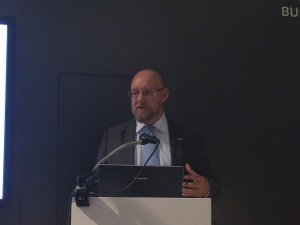 3D projection mapping eliminates the need for a flat, plain surface on which to play content in large-scale video projection. Instead, any 3D structure can effectively be a canvas, thanks to high-resolution, high-brightness projectors.

At ISE 2016, Panasonic released the white paper “Projection Mapping: Spectacular Opportunities,” written in association with Installation Magazine, which explores the demand for projection mapping, what clients expect from projectors, and, perhaps most important, what fans expect.

“The question we asked our customers and the public is, is 3D mapping the new fireworks?,” says Steven Yeo, marketing director, Panasonic System Communications Europe. “Are we witnessing the birth of a new form of public entertainment?”

The white paper explores several key large-venue projects in Europe, including projection of a large red ribbon on H&M’s Amsterdam flagship store or the celebration of 500 years of British history projected onto London’s Hampton Court. In the U.S., projection mapping has certainly made waves in NBA and NHL arenas over the past few years, with no signs of slowing. 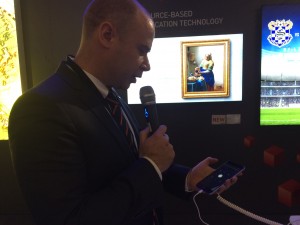 However, the size and scope of fixed-installation projection mapping — like that used in indoor arenas — pales in comparison with a large-venue project on, say, King’s Cross Station or Buckingham Palace. For projects like the latter, Panasonic unveiled the PT-RZ31K, the company’s highest-brightness three-chip DLP laser projector. Unlike lamp projectors, which require constant cleaning and routine maintenance, Panasonic says, laser projectors offer continuous maintenance-free operation.

“A large number of unique technologies are built on our experience that we have gained over the past four years of working with laser technologies in projection,” says Hartmut Kulessa, European projector marketing manager, Panasonic System Communications Europe. “That brings us to a situation today where we have the most complete lineup and the most comprehensive range of laser projectors. From the 5,000-lumen class up to the 30,000-lumen class, we can cover all different market requirements which are out there with laser projection.”

Interestingly, Panasonic’s other notable announcement for sports-minded A/V professionals targeted a much smaller canvas: the mobile device. The company showed off its Light ID technology, which enables content sharing between digital signage and mobile devices via blinking LEDs undetectable to the human eye. Using a dedicated mobile app, fans can instantly access content from digital signage equipped with high-speed backlight-control technology and a compatible set-top box linked to the display.

Once again, Panasonic’s booth at ISE was anchored by an eye-popping demonstration.

Although the technology was demonstrated as a tool for retailers and museums, it wouldn’t be a stretch to consider how the technology might be used in sports by smartphone-wielding, content-hungry fans.

Rounding out the Panasonic booth is the ‘Robotic Experience,’ or RobEx, which was developed in collaboration with event company XPION and features industry-grade robots maneuvering 98-in. 4K displays on top of a projection. Similar to last year’s projection-mapped Tesla Supercar, it definitely serves its purpose of getting showgoers to stop in their tracks.