With each passing Integrated Systems Europe show, traditional broadcast vendors like Blackmagic Design find themselves more deeply entrenched in the A/V market: no longer simply repurposing broadcast tools for A/V but actually building gear with A/V consumers specifically in mind., And with ISE expanding over last year’s edition both in number of days (this year’s show will run four days) and in projected attendance (more than 60,000 visitors expected), the gamble appears to be paying off.

SVG caught up with Simon Westland, Blackmagic’s director of sales, EMEA, on Tuesday morning to discuss how the company’s approach to the A/V market has evolved over the past few years, its plans to pursue IP-transmission technologies, and the creativity of the sports A/V industry. 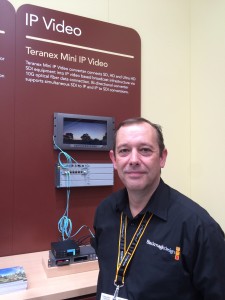 What’s new for Blackmagic at ISE this year?

The main thing for us at Blackmagic is that our presence in the A/V space just gets bigger and bigger. We first came to ISE about five years ago, and a lot of the A/V installations were starting to demand higher-quality video. They weren’t going to accept the old composite video and screens that had all the haze and the noise and everything else. I think that the demands we started to see then were really a push towards the broadcast-quality video signal, where HD becomes the base level of acceptance, not the high end. I think that that’s only increased across the five years.

Now what we’ve seen, to some extent, is that, in some areas, A/V has overtaken broadcast in terms of its demands and its quality. While broadcast is still struggling with 4K/Ultra HD — how do we get 4K into homes and [how do we build] the infrastructure required to do that? We see 4K satellite channels in Europe — in A/V, they’re looking at bigger and better and 4K and huge screens, and they want to move around lots of very high-quality video to lots of places.

If I [think back over the past] 12 months, what’s changed is just more of it. And we’ve been really surprised by the variety of projects that we’re now involved with.

What projects have you seen in sports A/V specifically?

Sports is massive. Sports is probably the biggest driver in that whole space for us, because I think it’s one of the markets that’s always had some of the highest-quality demands and probably one of the markets that could afford the highest quality in those environments. In broadcasting terms, sports is always a leader of technology: [think about] the Olympics, the World Cup. In broadcast terms, absolutely, sport is a driver, and I think sport is a big driver in A/V.

When I look at how many football clubs use Blackmagic equipment around Europe, it’s incredibly high as a number. In the UK, we’ve got the biggest teams — Liverpool, Manchester City, Everton — all using Blackmagic equipment in some shape or form, and what’s fascinating is, [it’s] not always in the same way.

What ways are you seeing sports clients leverage Blackmagic gear?
Some for production. Some for actual content that’s making its way to the screens or the Web or wherever it goes: mobile, the fan’s TV, the executive boxes, sending video to all of those places. The jumbo screens that appear within a stadium, screens out side the facility.

We’re talking Web. We’re then talking sports analysis, where video’s used so much for tracking the performance of an athlete. They use the statistics, and they base that on video and tracking all of the movements. In any one of those environments, we can have sports analysis for coaching. We can have the Web [and] TV side of things, the stadium infrastructure, with fiber and live switching, where the customer could have four or five different uses of video within their business.

That’s possibly the key: that video now appears at so many more parts of what they do. They might be a sports team, but their use of video is enormous. Maybe there was an acceptance five years ago whereby the quality was not so important; it was accepted that it was just OK. That’s switched completely. The quality demands are enormous, and they’re every bit as big as broadcast, if not [bigger], because, actually, they’ve accelerated past broadcast in what they’re doing.

We’re just seeing more and more uses of our technology, and I think what’s nice is now that’s also influencing us more. As a manufacturer, maybe when we first came to the market, we tried to bring just our products from broadcast into this market, and maybe we can say some of that fits but [not] all. I think we’re now seeing some of the decisions we can make in our product development, and our product path has clearly got sort of an eye on that.

What’s coming down the pike for Blackmagic?
Probably the one single thing would be the IP-video–technology demo that we’re doing. [It’s] the only thing on our [ISE] booth that doesn’t have a price next to it, and that’s because we don’t have a product yet. That’s purely a technology demonstration to talk about the use of IP and data networks to move video around. A lot of these places have that infrastructure where they’ve got fiber or copper switches, and they want to use that as their method of sending video but, of course, at high quality. We’ve got 4K video going through one of our little Teranex Mini converters, being turned into data, and going through an off-the-shelf switch, which they can use for network traffic and file sharing and all these things. We’re converting video into the switch, and we’ve another converter doing the reverse, taking it back out and turning it into pictures again.

Now, when you put something like that over fiber and start to think about moving 4K video files, which are huge in size, you can move those over fiber and you could move them 2 miles, 3 miles, 5 miles. In a facility — a big sports environment or something like that — you can find that the backbone might not be a traditional video switcher/router; it could be a fiber or a copper infrastructure within a stadium or within a facility. We’re converting our video to it. We don’t have a product to sell; what we really wanted to do at ISE was talk to the folks that come in and [think it] is interesting.

Had you been seeing demand for IP transmission in the A/V space?
A little bit. There’s a lot of noise right now, a lot of people chattering over IP. But I think a lot of people are looking at it thinking, Well, it’s not here now, it’s a distance away. I think we’re finding — and this is something that Blackmagic has always done well — [success in] making high-end technology into products that people can use. [We’re asking our customers,] ‘What would you need from us? How would you use it?’ We showed it at IBC and talked to the broadcasting guys there, and we brought it here again purely as a technology demo to find out how people respond and get their feedback, [which] is going to directly influence what product we make in that space. Already some of the feedback on that is quite interesting. People are prepared to accept that they don’t necessarily need it to do 4K right now. They’d be prepared for it to accept lower resolutions but still keep the quality of that. Not having perhaps such high demand on the technology, they do it with a copper switch instead of a fiber switch. That’s the kind of feedback that will help us develop.