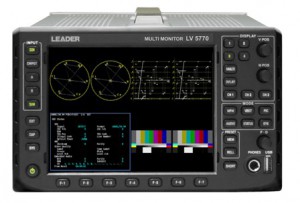 The Leader LV5770 will have a big presence in London this summer.

Leader Electronics Corporation has announced the appointment of Broadcast Service Centre (BSC) as Leader’s Accredited Service Partner for Europe. “Less than one per cent of Leader products are ever returned for repair or adjustment during the two-year warranty period,” comments Kevin Salvidge, Leader’s European Regional Development Manager. “Until now customers would send products needing service to the relevant distribution partner. If necessary, the instruments would then forwarded by air for repair at our headquarters in Japan.

“BSC has all the resources necessary to maintain and calibrate Leader equipment quickly, efficiently and dependably. The company will be handling our full range of broadcast test and measurement products including the LV5490 4K/UHD/3G/HD/SD multiscreen waveform monitor and its 4K/UHD-upgradable LV5480 3G/HD/SD equivalent, plus the LV7390 4K/UHD/3G-SDI/HD-SDI/SD-SDI rasterizer, LT4610 3G/HD/SD multi-format video sync generator, the LT4446 autoswitch and the LV5333 multi SDI waveform monitor.”

“We are very pleased that Leader has chosen us as its European service partner,” adds BSC Director Tim Davies. “Leader products are highly accurate, strongly built and well able to withstand the rigours of being used on location as well as the more sedate handling meted out to broadcast equipment in studio control rooms and postproduction suites. We look forward to working with Leader’s European customers, providing fast and dependable