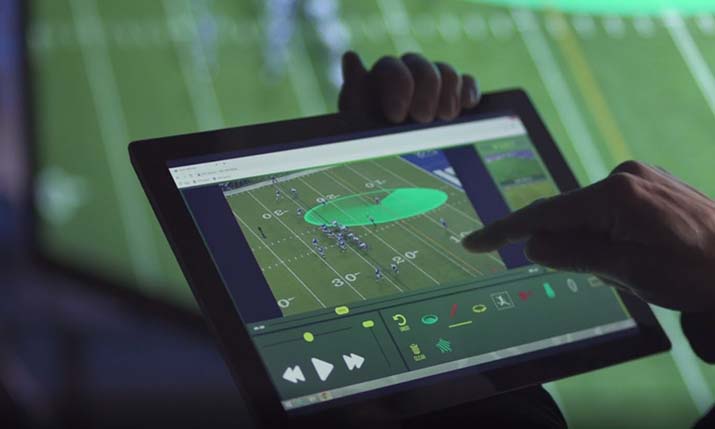 Tactic features tablet control for ease of use pitch side, in a truck or in the studio

Version 5.4 includes many new features, including a Player Detect function, which is free for existing users of its flagship product, Tactic Pro.

Using machine learning and AI, Player Detect provides automatic assisted keyframing of multiple players in parallel. It works by detecting the players in the video stream, tracking their movements and creating motion paths. By combining this with advanced camera tracking analysis and automatic keying, users can add graphics, such as name tags and trails, to follow players with just one click, without the need to manually add keyframes.

Luke Harrison, product manager at RT Software, commented: “Tactic Pro is now a game-changer, with complex graphics that tell a real story; for example, dynamic shaded regions showing how attack or defence is crucially affecting gameplay can now be ready for half-time or full-time discussions. It is the speed of production that is the killer benefit and our users now have the kind of functionality that was previously only possible by taking data from expensive and complex player tracking systems.”

As well as the Player Detect feature of Tactic Pro, the release also provides a host of new features for products across the range, including audio export and tablet control to allow a presenter to add graphics to the sequence live on camera from a wirelessly connected handheld device.

“Our customers who have been working with us on early releases of 5.4 with Player Detect tell us what a major step forward it is; it just works.” Harrison continued, “but nobody has to take our word for it; being purely video-based means that anyone can download an evaluation version from our website and see the benefits working with their clips.”