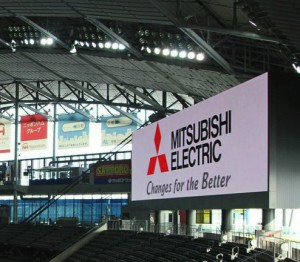 As a result of the new installation of Mitsubishi Electric Diamond Vision screens, Sapporo Dome is said to boast the highest resolution of any baseball or soccer stadium in Japan.

A total of Three Diamond Vision screens have been installed at the Sapporo Dome in Northern Japan. Two screens above the left and right stands measure 8.64m by 32m, and a further infield screen measures 3.84m by 13.13m. The new screens are respectively 1.5 and 1.6 times larger than the systems they replace and offer a dramatic increase in both resolution and contrast. The two larger screens deliver a resolution of 4000 x 1080 pixels at 8mm pixel pitch, making them the highest resolution LED screens in Japanese professional baseball.

The public will get to see the screens for the first time at the pre-season opening game between home team, the Hokkaido Nihon Ham Fighters and the Yomiuri Giants.

The Sapporo Dome installation is the first baseball or soccer stadium in the world to feature Mitsubishi Electric’s black package LED technology, designed to deliver enhanced contrast and superior performance in all lighting conditions. Mitsubishi recently hit the headlines for its traffic-stopping giant Real Black LED screen in Times Square, New York, which is now believed to be the world’s highest resolution LED screen with over 24 million pixels.