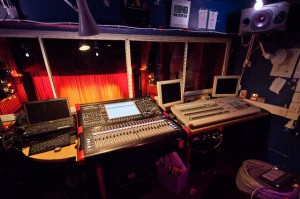 DiGiCo's SD9 console on hand at the Trinity Theatre

Stage Electrics has chosen a DiGiCo SD9 console to control an all-new audio system, designed for both live performance and digital cinema, at the Trinity Theatre in Tunbridge Wells, UK. Built in the mid 19th century, the Holy Trinity was Tunbridge Wells’ first parish church. It held its final religious service in 1972 was reopened as The Trinity Theatre arts centre eight years later, complete with a raked-seating auditorium and soon added an art gallery, licenced bar and computerised box office added.

“Stage Electrics is doing bigger and bigger sound installations including the installation and supply of equipment to the Royal Shakespeare Theatre last year,” says Business Development Manager for audio James Gosney. “As a consequence of being asked to design and supply high end audio systems, they have been expanding their audio team with people experienced in sound system design and installation, which is precisely my background.”

“The brief was for a multipurpose theatre system, one that would work for all the types of the events that go on here,” continues Gosney. “Like jazz evenings, musical theatre, straight plays, opera, local amateur dramatic groups, pretty much everything – and on top of that, 7.1 digital cinema, with its specific Dolby processing requirements.”

The Stage Electrics commissioning team set up the DiGiCo’s system alignment and output processing with presets for cinema, musical theatre, straight plays, jazz and other types of events.

“We had shown our demo SD9 to [Trinity Theatre head technician] Simon Diaper who loved it, partly because it’s so easy to use and so logically set out, but particularly because of the sound quality, which is noiseless really.  It’s beautiful,” says Gosney. “And that’s the system: a DiGiCo going into the K-Array amps into the K-Array speakers, and it’s that simple. I’m all for keeping sound systems as simple as possible. Keep the signal path as clean as you can and don’t complicate it with too much nonsense in between.”