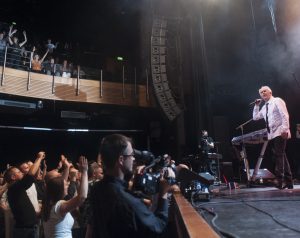 James Cumpsty is a leading UK-based photographer and video director whose clients include SVG Europe, for whom he has provided video capture and editing skills at multiple pan-European conferences during the last half-decade. He is also a long-time user of Grass Valley equipment, including the EDIUS nonlinear editing platform.

“As a long-time user of the software – which I have always found to be rock solid – I was very keen to try the improved video scopes in version 9.2,” says Cumpsty. “More and more of my work now involves working with S-Log or V-Log footage, or receiving 8-bit DSLR run and gun H264 output [that needs to be] polished. So the new scopes, which include a Histogram and an RGB waveform, are going to keep me from having to jump out of the platform, while the additional options for different colour spaces also constitute a big draw for me.”

The NLE continues to suit Cumpsty’s diverse workload of editorial and commercial filming. “A typical week for me can involve event footage, interviews for documentaries, multi-cam concert footage, and all sorts of commercials and marketing content. For me it’s about the speed, and always has been…. No codec has ever stumped the program; I’ve always been able to mix frame rates, codecs and even colour spaces on the same timeline without any difficulties.”

Highlighting the versatility of EDIUS he points to a recent project at the InfoComm trade show in Las Vegas which entailed “single person shooting with a XDCAM (4K 10bit 4:2:2) with a B-cam doing 4K 4:2:2 too. I just love being able to cut between these on my mobile set-up in real time. Recropping and zooming through the 4K footage to add that second camera movement were very readily achievable.”

EDIUS’ ability to support H.265 will also stand it in good stead, says Cumpsty. “Being able to output H.265 is going to help deliver to clients that need output for signage and new platforms. Above all, I love showing people how much can be done within this program – especially now that grading has got some new tools as well. It just makes my life so easy and helps me keep up with those challenging deadlines!”