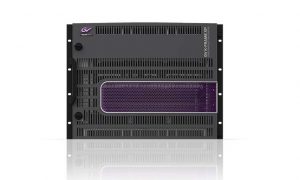 Designed to make higher resolution content creation easier, the new compact switcher features true single stream, full raster and 4K processing at 2160p. The K-Frame XP is claimed to eliminate the need for compromise in 4K UHD productions: there is no reduction in I/O count in 4K UHD, no reduction in M/Es, keyers or DPMS in 4K UHD, and no change in operator workflow in 4K UHD.

Marco Lopez, senior vice president of live production at Grass Valley, commented: “With the drive to deliver richer storytelling, we’re seeing customers really ramp up the volume of 4K UHD content being produced. This demand for increased production bandwidth has created workarounds that in the past have ultimately slowed down and put limits on the workflow. Grass Valley has built a hugely powerful hardware platform that can take on the ultra-fast pace of live content production, particularly sports, and ease the constraints of handling any resolution, even 4K UHD.”

The K-Frame XP is said to have the smallest footprint of any professional 4K production switcher, and to deliver the processing power to handle any resolution (HD, 3G, and 4K UHD), as well as HDR. The switcher also allows its 80×40 I/O count to remain unchanged, regardless of whether customers are producing in all IP, all SDI, or in hybrid environments at 1.5G, 3G, and 12G. The K-Frame XP supports all the latest IP and workflow standards such as SMPTE 2110 and AMWA/NMOS IS-04 and -05 standards.

Lopez added: “The new K-Frame XP meets all the needs of today’s 4K UHD production environments, allowing production teams to fully express their creativity with zero compromises and no change in operator workflow, giving them the freedom to deliver the stunning images and captivating viewing experiences that audiences around the globe demand.”