EditShare claims EFSv saves up to 75% on cloud editing costs 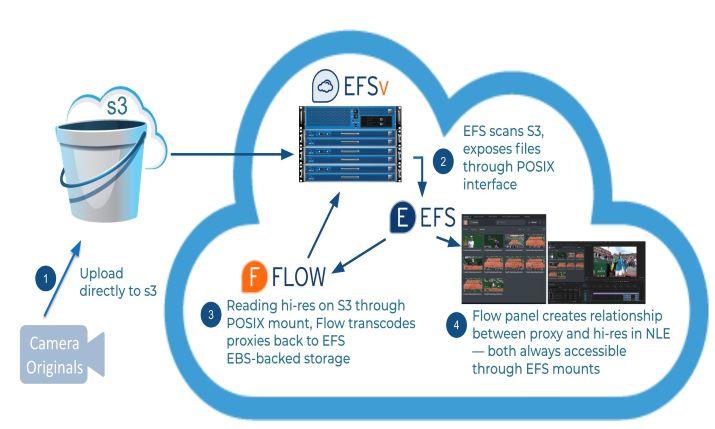 As a part of its cloud-based media management solution EFSv, EditShare has announced the capability to achieve true seamless proxy editing. This patent-pending feature enables the first cost-effective cloud editing infrastructure, overcoming one of the primary objections of migrating media workflows to the cloud.

Customers have long been asking for the ultimate in remote workflow flexibility.  Whether that means hiring video editors from distant geographies or simply letting employees and contractors work from home, production houses no longer want to be tethered to their machines.  EditShare claims its EFSv seamless proxy editing capability saves up to 75% on cloud editing costs.

In addition, EFSv also solves the workarounds associated with proxy editing and conforming to propel a true seamless proxy editing experience for all editors including Adobe, Avid, Blackmagic Design and Grass Valley.

EFSv lets users put their high-resolution files into cost-effective object storage but makes those files appear as if they are on a normal mounted block storage file system.

At the same time, EFSv provides the scalable high performance block storage needed for low-latency access to proxy files and renders.  Proxies can be generated by EditShare’s FLOW media management system, or by the users own tools. Both high-resolution and proxy versions are accessible at all times to the media creation application.

When users import clips into NLEs such as Premiere Pro using EditShare’s new Flow panel, the panel ‘teaches’ the application about the existence and location of both high-resolution and proxy versions, so users can toggle back and forth between versions any time they want.

While they won’t be able to play back their whole timeline from the object storage – mostly because of the latency – they can nonetheless view the original high-resolution clips at any time (including for colour correction), and when it comes time to rendering their timeline for a screening or for the final deliverables, users just toggle to (or link back to) the originals and hit the render or export button. There’s never anything to copy or restore from object storage.  Instead, users render directly from object storage.

EFSv not only works with the cloud workstations users connect to by advanced remote desktop software such as Teradici, but it also works over a VPN, so if users want to keep working from home with the editing application running on their own workstation or laptop, this is also an option.

Users can get the same proxy/high-resolution toggling, and this works with macOS-based workstations. If users need to download proxies instead of working with them ‘in place’ from central storage, that is also supported.