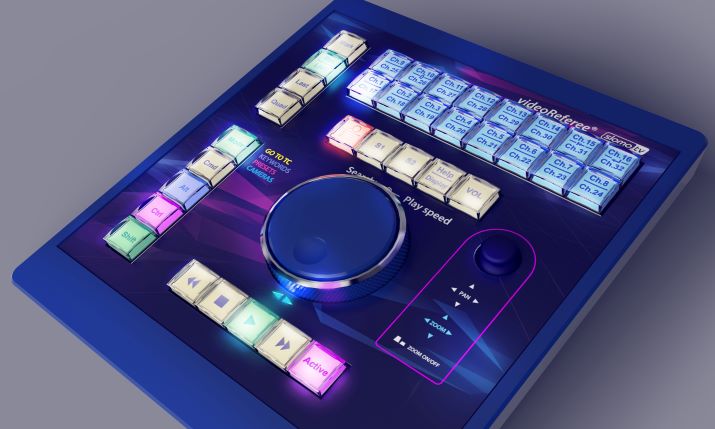 Based on feedback from practicing operators and its extensive experience in video-refereeing, the company created a new refereeing console which took into account both new requirements arising from introduction of video-refereeing into new sports, as well as changes in technical regulations and the operator workflow in various sports.

According to the company, one of the reasons for creating the new console was the necessity to have more direct access channels. The top slomo.tv servers now are capable of working with 32 3G channels. One VAR server for football could accommodate simultaneously up to four operators. Special requirements for connecting the referee buttons and working with the VOL also required changes to the referee’s console.

Also key was the need for the operator to save time by having quick access to all cameras and key system functions, without being distracted by complex multi-level commands when preparing and replaying controversial points. This all led to the development of a newly designed interface, based on a large number of illuminated RGB buttons.

The new interface offers instant access to any connected camera, quick formation and selection of presets, assigned keywords for each moment, quick search by keywords, and positioning by timecode. According to the company Control-VR is especially suited to creating and working with multi-screens, and for teamwork.

The new design uses large, highly reliable buttons with RGB indicators, as well as a simple and operator-friendly interface with colour and light prompts.

Control-VR also features a new reliable and responsive Jog/Shuttle produced by slomo.tv. The design uses four sleeve bearings, which provide lightness, smoothness and high reliability of operation. The Jog wheel can rotate freely for up to 40 seconds. The Shuttle wheel’s 64 positions left and right allow users to control not only the search speed, but also the speed of slow playback, with an accuracy of 2%.

The company has been paying greater attention to technology and systems for VAR in football, so the console incorporates controls and functions that allow working with VOL. On the right side of the controller there is a joystick for working with VOL, when this function is included in the software. The ability to connect a dedicated trackball to the console’s expansion port can make working with VOL even more accurate and comfortable.

The same port is used for connecting Red, Green and Blue VAR buttons. According to slomo.tv, this makes it possible to simplify the installation connections of the server and control panels for the VAR, assistant VAR (AVAR) and replay operator (RO).

The Control-VR has several modes of operation, including direct access to cameras, work with presets and quad or two camera views.

Using the prefix button with the numeric keypad allows the display of any of the previously prepared presets. Up to 16 keywords can be assigned for game moments; during a search mode the game moment can be found by the keyword or by the timecode.

Since Control-VR is designed for a parallel operation of several control panels with one video output, it is therefore equipped with an Active button, allowing the operator to intercept control. The console also has a built-in operator assistance function.

The new Control-VR can be connected via USB, Ethernet, RS232/422 (using the standard slomo.tv technology) and also be powered by PoE.