French TV channel TF1 and Viaccess-Orca collaborated on the broadcast of the world’s first live stream of a football match in 360 degrees and Ultra HD (HEVC-encoded), showcasing a premium television experience with virtual reality (VR) technologies for a test audience. A private audience enjoyed the 29 March football match between France and Russia in real-time, from three remote locations, using VR headsets. A recording of the live broadcast will be shown for the first time as part of Viaccess-Orca’s “Virtual Arena” demo at the 2016 NAB Show, April 18-21 in Las Vegas. 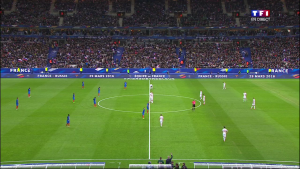 “Viaccess-Orca and TF1 are ushering in a new era for sports entertainment. At the event, our audience experienced an actual stadium ambiance, feeling immersed in the game. This was made possible by our best-of-breed, end-to-end solution for streaming of 360-degree video,” says Alain Nochimowski, EVP of Innovation at Viaccess-Orca. “Pre-integrated with an ecosystem of technology partners and compatible with existing industry standards, Viaccess-Orca’s ‘Virtual Arena’ offers a premium 360-degree television experience for the emerging VR environment. We are thrilled that, together with TF1 and our technology partners, we are shaping the future of television and paving the way to the ultimate immersion quality and viewer engagement experience.”

Viaccess-Orca’s “Virtual Arena” leverages its Connected Sentinel Player for secure playback and cloud-based Voyage – TV Everywhere as a Service (TVaaS) for interactivity and analytics. The VR ecosystem offered by Viaccess-Orca and its partners is pre-integrated, which allows content owners and broadcasters, such as TF1, to quickly deploy a fully immersive television experience.

Olivier Abecassis, Chief Digital Officer at TF1 Group said: “At TF1, we work every day to prepare the future of TV and develop new immersive experiences for our audience. This is the reason why we are very happy to be the first TV channel to experiment with the live stream of a football match in 360 degrees in Ultra HD with our partner Viaccess-Orca.”

The “Virtual Arena” demonstration will be available for the first time for the 2016 NAB Show attendees at the Harmonic booth, SU1210, April 18-21, 2016. To set up a meeting to view this unique demo, please visithttps://marketing.viaccess-orca.com/what-s-new/events/nab-show-2016.