Manchester has long been a focus for sport. This is partly because it is home to both Manchester United and Manchester City football clubs, which are currently vying for top place in the English Premier League, but more recently the area has become a centre for sports broadcasting, with BBC Sport and facilities companies such as Timeline TV moving into MediaCityUK at Salford Quays. 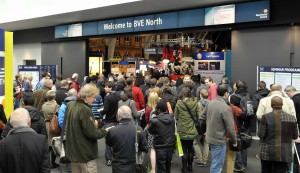 To capitalise on this growing media scene a north-western version of the BVE (Broadcast Video Expo) show was held in the city last year. BVE North returned to the Manchester Central centre last week (13-14 November), attracting new exhibitors to fill out the whole of the main exhibition area. The majority of exhibitors were distribution companies but some manufacturers, big and small, made the journey north.

Many visitors were drawn to Canon’s stand because of the large ice sculpture-like representation of a camera on display. Beyond that the company showed the Cinema EOS System, which is aimed at broadcasters as well as cinematographers and videographers. The series now includes two 4k cameras, the EOS C500 and EOS-1D C, along with the entry-level C100. As 4k is now starting to be a consideration in broadcast, Canon showed the EF cinema lenses range, including compact zoom and Cine Prime opticals.

For-A displayed its latest lower cost, small-scale vision mixer, the HVS-390HS, which comes in 1 M/E and 2 M/E versions, along with the FA-9500 3G/HD/SD multi-purpose signal processor. The only major audio console manufacturer exhibiting in its own right was Studer, which gave the recently introduced Vista 1 desk its UK debut. Designed to be more compact than others in the Vista range, this is aimed at broadcast applications where space is tight, including OB trucks and studios.

A new addition to Axon’s range of Synapse modular signal monitors and processors is the SLD200. This is a long delay unit for SD-SDI uncompressed baseband video, featuring two separate output delays.

Panasonic camcorders, including the AG AC-90, and the Blackmagic Design Cinema Camera, were shown by Holdan, which also ran seminars on wireless video production, cinema workflows, the AVC-Ultra, and Panasonic HPX600 next generation codecs and multi-camera production.

On the specialist camera side Slow-Mo had the Photron SA-X, which shoots 20,000 frames per second at 1024×576, while HHB displayed the Studio Technologies remote camera interface for OB and ENG work.

AbonAir’s latest wireless video link was on the Garland Partners stand, along with Teracue HD/SD decoders and ViewCast encoders. The AB305TM runs in both HD and SD at all resolutions and frame rates, offering a low delay mode of 90msec. Garland also represents the LiveU 3G video up and downlinking system, which is being used increasingly for sports broadcasting.

Despite the proximity to MediaCityUK, many exhibitors complained they had not seen many BBC staff round the show but a BBC Sport representative was spotted looking at the wares on the Rycote display. Among these were the new MHR (Microphone Holder Replacement) mounting accessory for camcorders, the Windshield Kit for stereo acquisition based on a pair of mics in the ORTF pattern, the Tac!T (pronounced ‘Tass-it’) low noise cable, and the Softie Windshield, aimed at the Sennheiser MKE 600.

Rycote exhibited on the Sennheiser stand, the main focus of which was the recently launched Digital 9000 system. Other wireless mic highlights were Audio Limited’s TXD range and CX2 two diversity receivers in one box unit together with a preview of the ATX plug-in transmitter; and the Wisycom MPR30 receiver, which was shown on the Raycom stand and is due early next year.

On the hardwired mic side there was a world exclusive for Source Distribution with the RØDE Reporter mic. This dynamic model has a long handle with a flat edge for resting the thumb, an omnidirectional pattern and a capsule housed in a multi-layered mesh basket. Shotgun mics are a staple of sports broadcasting and Canford had a new one in this field from Voice Technologies, which is best-known for its miniature mics. The VT5000 is a waterproof, lightweight mic designed to be mounted on cameras for ENG, EFP and documentary work, as well as sports.

The organisers of BVE North reported an eight percent rise in visitor numbers, an unaudited figure based on the first day. The show will be back in Manchester from 12-13 November 2013, while BVE in London will be in its new venue of the ExCel centre from 26 to 28 February.