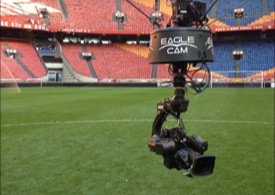 The Eaglecam from Film Dynamics is the first four-point cablecam system to be introduced in the Netherlands.

Sport broadcasters looking for a new 3D cablecam system have a new option courtesy of Eaglecam, a system built by Film Dynamics and Toprek Rigging that recently made its debut for Eredivisie Live during a Dutch Premier League soccer match between Ajaz and AZ in the Amsterdam Arena.

“We are also in discussion with other major Dutch production companies as well as interested parties from abroad,” says Pieter Bruin, Film Dynamics, managing director. “It is very suitable for sports but also for events like concerts and TV/film productions.”

The Eaglecam consists of a gyro-stabilized camera attached to four Kevlar cables coming from computer-controlled winches. The camera flies in three-dimensional movements and speeds up to 36 km/hr above the field.  It is the first four-point cablecam system to be introduced in the Netherlands.

“The Eaglecam includes our expertise, the latest techniques and best materials like the Flighthead by Filmotechnic,” says Bruin. “Thus we provide the highest image quality, combined with Toprek’s Flying-by-Wire system that meets the strictest safety standards.”

Bruin also says it is a very flexible system because it can fly with not only compact box cameras but also a full-size stereoscopic 3D rig with Red One, Sony F65, or Arri Alexa cameras.

“And thanks to the high-end computer-controlled winches we can fly camera rigs up to 300 kg at speeds of 10 metres per second,” he adds.