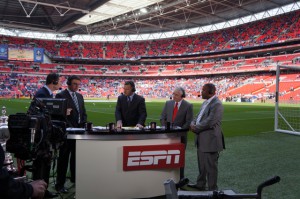 ESPN’s football coverage is in mid-season form, as its Clydesdale Bank Premier League coverage (which runs through 2017) and its Barclays Premier League coverage (which ends after this season) are underway. And both have a number of new enhancements on both the interactive and broadcast side that will improve the viewing experience for ESPN viewers.
“We’re forever changing,” says Andrew “Buzz” Hornett, ESPN, senior producer, Europe. “We made little tweaks this year and there is nothing dramatically different.”

Scotland’s Clydesdale Premier League coverage this year has added cameras in every dressing room and also features interviews with managers at halftime. “Giving more access to Scottish football is great,” adds Hornett. “It gets viewers closer to the story and we can better explain it and unravel it.”

Meanwhile, England’s Barclays Premier League has not yet allowed that level of access off the pitch but its on-the-pitch coverage continues to advance. The core of the TV coverage takes place in OB units from SIS LIVE and typical coverage involves approximately 27 cameras with a couple of Super Slo Mo cameras, an Inertia Unlimited XMo high-speed camera, and more. ESPN handles both the domestic coverage as well as the world feed.

“We create a whole experience around the game, with an hour of build up and then as much time as we need for post match analysis,” says Hornett. “And when the match starts there is no luxury of sitting back…you need to pick angles fast and tell the story. We have a good team working together.”

One enhancement this year is the Virtual Table Top, an analysis tool that is based around a 65-inch built into a table. RT Software tools are then used to create computer-generated models of the players so that analysts can drag the players around the virtual playing field.

“It advances the use of touch screen technology and allows the announcers to do more of the analysis themselves,” says Hornett.

Additionally, ESPN presenters can interact with life-like models of Barclays Premier League players on the ESPN set to demonstrate plays and in-game situations. Virtual studio camera tracking technology from Vinten Radamec captures data that is compiled by Opta Sports and then passed through to the RT Software graphics package for rendering.

“In terms of enhancements we always think carefully about why we are adding something rather than just throwing them in,” adds Hornett. 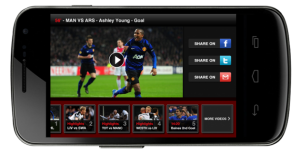 ESPN’s Goals app has been downloaded more than 2.5 million times, allowing fans to catch replays of goals within minutes of being scored.

While the production side of ESPN takes advantage of new tools for content creation the new media side is taking advantage of new tools for content distribution. ESPN Goals, the network’s mobile application is in its third season and offers live scores, video highlights, and clips of every goal for all 380 games within minutes of occurring (with the exception of Saturday afternoon matches which are embargoed until 5:15 p.m.).

“It’s laser focused and exclusive to us,” says Anil Nair, ESPN EMEA, director, mobile. “And we had a very good run last year with 2.5 million downloads of the app and strong usage figures.”

The video delivery partner for the mobile efforts is Perform. Perform staffers cut the videos and worked closely with ESPN in the offseason to optimise the video quality across a variety of devices.

“The iPhone is pretty straightforward because it is just one device and the only difference is you need to scale the video up for the iPad,” adds Nair. “But Android is different because there are great new devices that can deliver high-quality video but then older devices like the Wildfire that are not as capable. So we use different transcodes to deliver the optimal experience for a device.”

ESPN will lose the Barclays Premier League at the end of this season but there will still be plenty of football action on the network. Scottish Premier League will be a fixture through 2017 at least and the network is broadcasting matches from the Bundesliga, French Ligue 1, Italian Serie A, Russian Premier League, FA Cup, Euro Championships, and more.