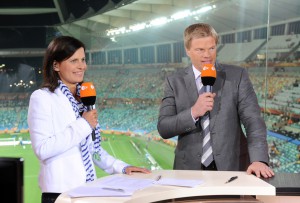 Public service broadcasters ARD and ZDF will share the rights to broadcast the World Cup for audiences in Germany. Surprisingly, this will be the first occasion since 1998 that the two organisations will be totally responsible for the coverage of all 64 matches during the tournament. Over the last 16 years there have been opportunities for rival German broadcasters to provide programmes under sub-licensing agreements with the rights’ holders.

However, rights restrictions mean that ARD and ZDF will not broadcast the games on Eutelsat’s Hot Bird satellite system at 13° East – the facility used by the companies to cover the Middle East and Northern Africa. That means all live coverage will only be broadcast via the smaller footprint of Astra (19.2° East), which acts as the main DTH platform for German households.

ZDF will kick off the World Cup coverage with the opening ceremony and the subsequent game between Brazil and Croatia. The final game of the tournament will be shown by ARD on July 13.

“Our planning exercise really began back in May 2012,” reports Dieter Gruschwitz, head of ZDF sports department. “The logistics of working so far away from our home bases means there has been a significant advantage to be able to share the responsibilities across two broadcasting organisations. In all, around 450 staff from ARD and ZDF will be working in Brazil to provide our extensive coverage for our viewers. As well as sharing staff, we will also be using the same facilities, including a studio provided on a roof terrace in Rio at the Copacabana.”

Gruschwitz reveals that the sharing arrangement means the broadcasters have the resources to install their own technical equipment both within the International Broadcasting Centre (IBC) at the Riocentro, and at the matches in which the German team is involved.

“We anticipate utilising between three and five cameras in our allotted unilateral flash positions or in the mix zone. This will provide our viewers back home with the most complete coverage we can offer. Of course, we work very closely with HBS in all of this planning.”

The broadcasters will be bringing an OB truck from Germany to control the output from these unilateral positions. ARD and ZDF sports directors will be employed and they will carry out their own vision mixing. German language graphics will be added in line with specifications laid down by FIFA.

Gruschwitz continues: “In personalising our coverage for our viewers in Germany, we will be incorporating both the pool fed ISOs and special Clips Compilation Channel content which comes from HBS.”

He explains that the Compilation Channel provides MRLs (Media Rights Licensees) access to camera angles which are not part of the main match feed. These feeds are available to broadcasters in near real-time.

All editing will be carried out at the broadcasters’ unit within the IBC using a mixture of Avid and EVS systems.

Alongside the traditional television coverage, the websites of both broadcasters will carry, for the first time when it comes to the World Cup, live-streams of all games, additional camera angles, and multimedia offerings containing details and information about the matches and players.

With planning now almost complete, what have been the main challenges for Gruschwitz when it comes to meeting the broadcasting requirements for such an important event in the sporting calendar? “Without a doubt, the logistics of covering all the games is a major consideration. The distances both from Germany and Brazil and then between venues are great, and then there are the customs procedures involving the temporary import of a great deal of technical equipment to be taken into account. Just as important, of course, is the overall cost of mounting such an operation – so we have to be mindful to be as cost effective as possible.”

He goes on: “Although long distances were involved when we covered the last World Cup in South Africa, the situation is quite different this time around. The reality is that we are dealing with two quite diverse countries with a variety of different situations to handle. And that means there is no comparison between the two countries when it comes to our technical and production operations. But despite that, we look forward to a great tournament!”

Eckhart Godickemeier, ZDF sport production manager, says that the broadcasters have decided to forego being within the HBS studio facility on Copacabana and instead have found their own private rooftop penthouse location. Fibre connectivity allows the four cameras in the studio to be remotely controlled from the IBC.

“We will have two ENG crews located at the German team camp and in total we will have about eight ENG crews,” adds Godickemeier. One challenge is that, as a public broadcaster, ZDF and ARD will need to rely less on the feature pieces provided by HBS and do more of their own original reporting. “Objectivity is a main mission,” he adds.