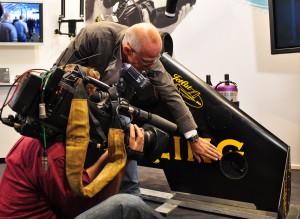 IMT’s microwave technology in use at the New Zealand International Air Show.

Integrated Microwave Technologies, a Business Unit within the Vitec Group’s Videocom Division, is teaming up with Quinto Communications,a prime distributor and systems integrator throughout Australia and New Zealand, to support daredevil Yves “Jetman” Rossy during the New Zealand International Air Show on 26 January.

IMT’s RF Central microLite HD digital transmitter will be on board Jetman’s jet-engine powered wing to help the aviation trailblazer transmit high-quality live HD video of his flight to receive sites below and for live broadcast feed to New Zealand Channel 3 News. This will enable tens of thousands of fans to view his flight up close and personal on displays positioned on the ground. The New Zealand International Air Show, which will take place at North Shore Airfield, marks the first time Rossy will be flying in New Zealand.

Known as the only man to fly with a jet-propelled wing, the 53-year-old’s perilous flight will begin as he is dropped from a plane with only his wing, comprised of carbon fiber and four jet engines, keeping him in the air. Reaching speeds of up to 300km/h Rossy will steer using his body movements. According to him, this allows him to fly as free as a bird. Thanks to IMT’s microLite video transmission capabilities, those attending the air show will be able to view his flight, which will be captured by two GoPro cameras mounted on the jet pack’s wing tips.

“We’ve been working with IMT for several years due to the quality and reliability of its products,” says Tom Pavicic, chief executive officer at Quinto Communications. “IMT’s cutting edge technology is what attracts our customers to the company again and again, and we are happy to be the provider of choice in the region.”

The microLite transmitter provides high-quality, full-HD video directly to ground-based receive equipment. The RF Central microLite HD is an ultra-compact MPEG-4 COFDM digital transmitter designed for the next-generation of compact cameras featuring full HD/SDI capabilities. Its ease of use and ultra-low electrical power requirements gave Rossy everything he was looking for when selecting the video transmission equipment for his flight. The antenna on his wing is a blade antenna from Haigh Farr, recently acquired by the Vitec Group. Haigh Farr represents some of the finest antenna engineering in the world. Offering a truly hemispherical pattern, its blade antenna helps ensure that the signal is transmitted to the ground.

“We are excited that Yves Rossy continues to use IMT’s technology to transmit live HD video to his spectators on the ground, as it is a testament to the engineering and quality of our products,” says Integrated Microwave Technologies Divisional Chief Executive Stephen Shpock. “The ease of use of the RF Central microLite transmitter enables Rossy and his team to set up an RF video solution with confidence.”