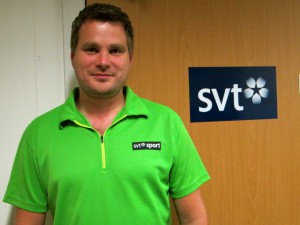 There are plenty of examples within the Olympic IBC of broadcasters tying their IBC facilities more closely to their home broadcast facilities but there may be no better example of possible future workflows than Swedish public broadcaster SVT. With the help of Net Insight’s Nimbra JPEG 2000 encoders and decoders, at STM4 connection between a studio outside of the IBC and Stockholm that delivers 600 Mbps of bandwidth for five HD-SDI signals, and two new master control rooms in Stockholm the network is able to deliver more than 125 hours of content each day with only 15 technical personnel in London.

“We have the same amount of people as in Vancouver but there are more ENG and editorial people here,” says Adede Granberg, SVT, program and production developer. “As a public service network we need to move money from the technical side to the content creation side.”

The Olympic programming is delivered via two broadcast channels and six Internet streams. The latter has found tremendous success, with 240,000 unique users on the first day, not bad for a nation of only 9.5 million.

As many as 150 people are working on the coverage in Stockholm and 60 in London, including only four technicians working in two shifts. The SVT presence within the IBC includes the router and four Avid Media Composer editing suites that are used to build feature packages. EVS IP Directors also allow the editors and producers to cut clips from the OBS feeds and send content to and from three EVS servers in Stockholm (one XT3 and two XT2) that have a total of 16 incoming channels and four outgoing channels.

The control rooms in Stockholm assemble the content via 50 OBS feeds, four mixed zone feeds, and the commentary circuits from 12 venues, all of which pass through a GVG Trinix 256×256 router that is shared with YLE Finland and NRK Norway.

“We have been working closely for the past year with them to build up technical facilities and then we share the cost on things like the router and also share our mixed zones,” explains Granberg.

The small internal IBC operations is complemented by a studio is located outside of the IBC in nearby Marshgate, making it easier access for guests and SVT personnel to work as they do not need credentials. The studio has three cameras with CCU and audio mixing but no connectivity with the IBC. Instead all camera signals are sent to Stockholm where four control rooms can then access the signals as needed. The control rooms in Stockholm include Grass Valley Kayenne vision mixers, a news automation system, Vizrt graphics, and a VSM system that controls all technical equipment in-house. One control room is handling the six channels for the Web, another morning TV news programmes, and the last two handle the broadcast channels.

“With JPEG2000 the latency is only 130 milliseconds so they can easily cut an interview taking place at the studio,” adds Granberg. “And there is also a return picture without any latency. And even if they are talking to the mixed zones from the studio there is only 200 milliseconds of delay.”

Granberg says one goal was to give as much control as possible to the facility in Stockholm. To help in that effort there is not direct communications between the IBC and the studio at Marshgate.

“Every decision has to move through Stockholm, they have to be in control,” he adds. “They have the editorial input, decide the running order, put the stories together, and then determine the running order for the output side. It’s a new workflow…but we’re very happy with how things are going. We have a huge operation in Stockholm and they are in factory mode. And that gives more value to viewers.”

The Nimbra system also gives personnel in Stockholm access to the entire archive in Stockholm.

“In Beijing the entire crew needed to bring huge stocks of tape and now they just browse on the local network in Stockholm,” adds Granberg. “From a workflow perspective there are fantastic editorial benefits.”

The use of JPEG2000 not only allows for interviews to be completed from Stockholm but off-tube commentary.

“We can have an expert in Stockholm while the event commentary is done here and there is no latency as they are both able to comment on the same picture,” adds Granberg.

SVT has five off tube studios in Stockholm although there are also 12 venues with commentary positions in London. “We still try to be on site for the biggest events,” adds Granberg.