Live from The Open: BBC delivers for world, domestic viewers 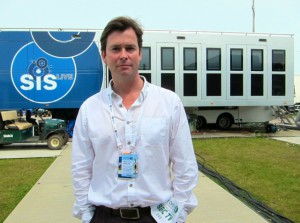 The BBC's Paul Davies in front of SIS LIVE OB1 which handled the world feed of The Open.

In many respects The Open this year could not have gone more smoothly for the BBC. Yes, the weather hampered set-up and early coverage but by the time Friday rolled around relatively calm and dry weather was the order of the day, allowing the team to focus less on battling the elements and more on telling the stunning story that ended with Ernie Els hoisting the Claret Jug on Sunday night. And for BBC Executive Producer Paul Davies and the team the hoist signaled another victory as well with a successful domestic and world feed presentation to golf fans around the globe.

“It’s a pretty complex production that has grown in the past 30 to 40 years to having 80 cameras on the course and interactive and sophisticated graphics,” says Davies.

Unlike the other two broadcasters on site, ESPN and TV Asahi, BBC is responsible not only for meeting the demands of UK viewers but viewers around the world via the host broadcast/world feed. SIS LIVE’s OB1 truck, featuring a Sony MVS4000G vision mixer, Calrec Alpha and an Omega Bluefin Sigma boards, three rows of production desks, and more is the main production unit for the world feed. And then there are the 80+ Sony cameras and Canon lenses on the course.

“It was built for The Open and was created and laid out with functionality for The Open,” says Davies of the BBC’s main domestic OB vehicle. “And we have another truck doing the domestic feed as we need a genuine world feed that has clean golf without presenters, commercial messaging, or interviews. Then there are TV Asahi and ESPN who embellish the feed with their own cameras.”

Working with ESPN and TV Asahi is an important process for the BBC as the goal is to make sure camera allotments on the course are redundant only as needed. The same goes for the skies above.

“We work incredibly close with ESPN to combine our resources,” says Davies. “We both finance the plane because we both want the same shots. And ESPN also has some good tracer technology that we use in the world feed.”

Both the domestic and world feed OB units are tied closely to an Arqiva OB unit that houses additional replay personnel working on EVS servers.

“There can only be one golf shot on air and, in theory, there can be 17 or 18 other shots going on as well,” says Davies. “In the Arqiva sub-mix truck we record every green cameras so we don’t miss a shot or a hole in one and then also submix other good golf shots.”

One unique element offered up by the BBC for world broadcasters is an hourly package of highlights for players from eight different regions around the globe. “We package the shots from the past hour and put those on separate feeds so that broadcasters can integrate those shots into their broadcast,” explains Davies. Six people put together that service and Davies says it has been well received around the globe.

“Other slams are looking at it and it’s a good service for broadcasters,” he adds.

For domestic viewers, the most important challenge is making sure viewers who tune in on Saturday and Sunday can be quickly brought up to speed on what transpired on Thursday and Friday.

“We’re on air at 10 a.m. on Saturday and Sunday so there is a five-hour buildup before the leaders go out,” says Davies. “So we have Sir Nick Faldo and Tony Jacklin doing reports and retelling the stories of the first two days and then some live hits from Kim Brown who is on the course. And then there are range interviews and other extra colour reports.”

With The Open and Wimbledon now in the rear view mirror it is time for attention at the BBC to turn completely to what, arguably, could be its most important sport broadcast ever: the London Olympics.

The BBC has been commissioned by Olympic Broadcast Services (OBS) to produce tennis, football, boxing, rowing, and equestrian events. But then there are the domestic needs as well for not only three TV channels but also 24 channels that will be streamed via the Internet, delivering every event live to UK viewers.

And then there is the opening ceremony, which will be held on July 27 beginning at 9 p.m.

“The plans are in place and there have been quite a few rehearsals so we know what [creative director] Danny Boyle’s vision is and what he is trying to create,” says Davies. “And we begin our show two hours ahead of the ceremony so we are figuring out what we can do there before it goes live at 9 p.m.”