ESPN’s coverage of the British Open was highlighted by some new enhancements, plenty of cameras, and a tournament that had weather conditions that, thankfully, didn’t make championship days as difficult as the practice and set-up days. And it was IMG Media and CTV OB that once again provided the technical backbone and engineering services for this year’s coverage. 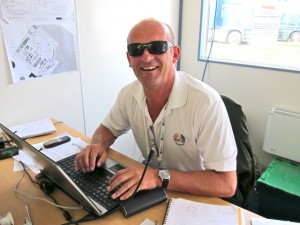 Hamish Greig of CTV OB says coverage of The Open was a success for the tech and engineering teams.

“It was huge that we weren’t fighting the issues of water of fog on the lenses,” says Bill Lacy, IMG Media, VP of production. “Bad weather really interferes with the ability to move around the course and it was so bad earlier in the week that the R&A was considering banning buggies in total.”

Nonetheless, weather conditions did prove challenging during the setup and practice days. “It delayed us considerably as there was standing water on the course for a couple of days,” says Lacy. “But we pad the schedule because it’s not unusual to have bad weather here.”

A permanent underground fibre network helped with much of the set up, making the job of cabling much easier for ESPN, the BBC, and TV Asahi, the three broadcasters on site with unilateral productions. But there was still plenty of surface cabling that needed to be laid amidst the puddles and mud.

The core of ESPN’s coverage was CTV’s OB1, home to the production of both the golf coverage and ESPN Sportscenter (the BBC operated out of SIS OB units and TV Asahi was located in Visions units). OB9, meanwhile, was home to ESPN’s interactive TV service and delivered a mosaic of channels to DirecTV viewers and ESPN3. Having Sportscenter originate from OB10 allowed OB9 to be used for the ITV service, eliminating the need for a third truck. 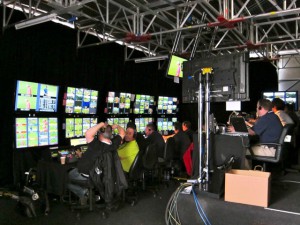 The depth of ESPN’s coverage required the addition of 32 cabins to house everything from additional Pro-bel routing, Avid editing, Vizrt graphics, emerging technologies, audio effects mixing, and the replay operators that all produced not only the main golf coverage but the wealth of programming around the event.

The advantage of having cabins is not only space but also redundancy. The ‘Tosser’ cabin (Technical Operations and Support Resources), for example, has a 512×512 Probel Signus router that is available alongside the routers in OB9 and OB10.
“If one fails we still have two out of three available and makes the show much more flexible,” adds Hamish Greig, CTV OB, technical director.

The decision to use cabins is primarily a result of the nature of the OB business in Europe. OB10 is the primary production vehicle for the European Tour so it has the proper pedigree for golf. What it doesn’t have are the B, C, and sometimes D units that are part of U.S. golf production. 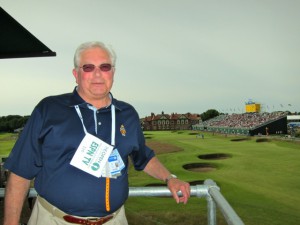 Bill Lacy of IMG on the ESPN set outside the 18th fairway.

“We have the bulk of CTV’s equipment, less commitments to cricket, and to try and marry their trucks to another vendor would be problematic,” says Lacy. “Plus the are the only OB provider in the UK or Europe that has golf expertise.”

Greig says that OB9 and OB10 do operate as one unit with respect to audio. “They both have Calrec consoles so the one in OB9 is used for the effects and the one in OB10 handles the main show.”

ESPN’s coverage relied on 49 cameras, including seven RF cameras and six robotic cameras located behind the tee boxes. An Inertia Unlimited xMo was also used. Combined with the BBC cameras and those from TV Asahi more than 100 cameras were on the course, making the British Open the largest golf production in the world.

CTV does have one piece of proprietary technology at the Open for camera signal distribution: a SMPTE hybrid elimination device that has a bigger transformer than other products on the market. “It has other small features as well but the big difference is it can go up to a kilometre away,” adds Grieg.

The success of a golf tournament often hinges on the EVS operators and the British Open is no different. But what is different is the technical set up for the replay area. Given the size of the team, replays are done out of a cabin with three replay directors and operators overseeing six holes each (there is also a swing EVS operator available). The cabin also is home for producers and a senior ISO producer who sells replays to the producer in the OB10 unit.

“There are also three audio mixers tied to the three EVS machines to maintain proper levels between cameras,” says Lacy. “That way the EVS operator doesn’t have to do any audio switching.”

An editing cabin with 13 EVS servers, two Avid Media Composer desktop editors, two Avid Media Composer laptop editors, and an 8TB Avid server supplied by UK rental company Hyperactive Broadcast also played a key part in the production. ENG material was ingested and logged into the system during the tourney and made available alongside archive material ESPN shipped in on a 16TB SAN and additional hard drives. Producers and editors across the compound could use one of 17 EVS IP Directors to search the servers for content needed for promos and features.

While ESPN cabins dominated the compound its Open coverage studio and Sportscenter studios dominated the 18th fairway. Built by Tall Order Structure, the two studios were stacked on top of each other and also featured a new innovation courtesy of Solarfective. The single-panes of 15-foot x 4-foot glass behind the sets incorporate a new polarising technology that allows a polarising filter on the camera lens to be rotated and properly adjust so that both the talent and the 18th fairway can be seen without any blooming or washed out areas. And as the filter is adjusted it has no impact on the lighting of the talent. 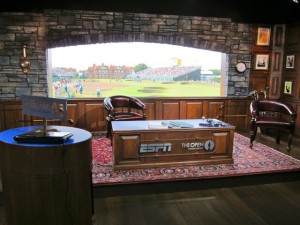 In recent years a top feature for ESPN coverage has been Flight Tracker, which tracks the flight of the ball off the tee box. This year it was used on four holes: 1, 3, 5, and 6. And railcam camera systems located behind the tees made it easier to make sure the flight tracker camera, a Sony P1, was located in the optimal position behind the golfer.

Also new is a variation of the technology that is used at the Home Run Derby. At the Derby the stadium is mapped so that an operator can click the mouse on the place where the ball landed and get an immediate distance for that location.

“Right after the ball comes to rest we can show how far he it off the tee and what he has left to play the hole,” says Mike McQuade, ESPN producer for the British Open.

“It’s designed specifically for RF cameras so we can control the transmitters, receivers, and cameras from one [software system],” explains Hermes.

Wireless cameras this year also made the move to omnidirectional transmitters, something that Lacy says was experimented with last year. Five receive sites around the course obviated the need to have pointers with the RF cameras, helping the R&A eliminate additional personnel inside the ropes. And wireless microphones also saw a change as RF mic receive sites were moved off of the camera cranes that tower over the course in order to prevent local TV station signals from causing interference.

The wet set up, the calm early rounds, and the windy but still dry and sunny closing round ended with a surprise as Ernie Els managed to win the tournament courtesy of a collapse by Adam Scott. There was no such collapse for the team from CTV, IMG, and ESPN and, in fact, the CTV OB10 truck is already on its way to Turnberry for the Senior Open and OB9 is on its way to London for Aquatics coverage at the Olympics.

“I’m proud and happy of the job the engineering team did,” adds Greig.