Danish event and television production specialist dbLux has taken delivery of a new outside broadcast truck, complete with a DiGiCo SD10B digital console, that will be used to produce 300 Superliga football matches during the next three years. The Superliga is Denmark’s top football league, featuring 12 teams who play each other three times during the season. The teams finishing in the top four places at the end of the season gain places in the UEFA Champions League and Europa League, so competition between the comparatively small number of clubs is fierce. 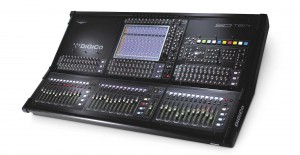 In order to fulfil this, along with other outside broadcast and music production tasks, a brand new 10 camera HD truck was built by Avit Systems A/S, who also installed all the technical equipment and infrastructure. Built to conform with EBU R128 loudness standards, the truck’s SD10B was supplied by DiGiCo’s Danish distributor Soundware A/S.

“The SD10B is cost efficient while offering lots of broadcast-specific features,” says Soundware’s Kim Johansen. “We demoed the console at ProLight+Sound and, not long after, dbLux ordered one with remote PSU, plus three     D-Racks on HMA optics.”

“One of the major reasons for choosing the SD10B was the flexible fader layouts and the multichannel folding feature, which really cleans up the layout of the desk,” adds Avit Systems’ Anders Fiedel. “But the whole DiGiCo way of thinking fits the bill very nicely. Almost anything is possible on the SD10B and the purchase price, including D-Racks and PSU relocating kit, made it an obvious choice for the new truck.”

The DiGiCo console is fed by the vehicle’s Grass Valley audio router, via two MADI streams totalling 112 channels for EVS and Avid production systems, plus intercoms. Inputs also come from the three D-Racks on Optocore connections for field of play microphones and on-site studio sources. The D-Racks also feed the headsets and in-ear systems for reporters and studio anchors.

“The SD10B produces two main stems of audio for broadcasting – the main 5.1 mix for Danish TV stations and a ‘world feed’, which is the 5.1 main mix without the Danish commentary,” says Anders. “The two 5.1 stems are sent via MADI to the truck’s audio router, then to TC System 6000 mastering with the new ALC6 ‘Olympic’ algorithm for R128 loudness processing.”

The processed 5.1 stems, plus two R128 loudness-corrected stereo mixes, are then fed back to the SD10B´s monitor section, where the mixing engineer can choose which stem they want to monitor. The two stereo stems are also sent to the SD10B´s matrix, where they are summed down to two further mono stems for intercom use. The desk also mixes eight additional mono feeds for intercom use and further mono feeds for studio monitoring.

“The audio quality of the SD10B is second to none and its superior way of handling multi-channel inputs and outputs puts other desks in the same price range to shame,” Anders continues. “The monitor section also has some really nice features, like a user definable monitor matrix with calibrated monitor levels and insert point for room correction. The calibrated monitor levels and other functions are put on the macro buttons for easy access.”

Anders feels that the macro buttons are one of the best features of the desk for broadcast.

“We can either capture functions or manually programme macros for tasks that are used frequently and need to be available instantly,” he concludes. “A prime example being the ability to instantly route a camera microphone to an EVS input for spontaneous interviews.”