Several months on from the end of the Games, it has emerged that the BBC used Genelec’s 5.1 DSP loudspeakers to monitor broadcast audio in its three main sound galleries during the 2012 London Olympics. 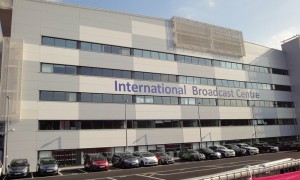 The Genelec were selected for monitoring the audio for BBC channels 1, 2 and 3, which were broadcasting a combination of 5.1, stereo, HD, SD and 3D transmissions. Located in the Olympic Park at the International Broadcast Centre, the galleries were the mixing point for virtually all of the broadcaster’s sports TV output during the Games.

BBC Studios and Post Production sound supervisor Peter Bridges says that DSP was used to line up the speakers in a challenging monitoring environment: “There is often compromise in setting up temporary control rooms, but soon after the Genelecs were set up and aligned we were able to start mixing.”

The configuratin in the three main sound galleries was a 5.1 system comprised of Genelec speakers used as satellites with a matching sub-bass component, while the fourth room featured two full-range Genelec speakers.

“In temporary set-ups like these we normally have to make the best with what is provided. [Distributor HHB Communications] arranged a demo of the Genelecs and then aligned them onsite for us. Previously we’ve put together a speaker control and management system ourselves, which can be challenging, so it was essential that we had properly aligned systems for London 2012.”

Genelec DSP systems are built on the Genelec 8000 series technology with the addition of a digital networking system, on-board DSP and the AutoCal automated loudspeaker system calibration.

“The Genelec AutoCal feature is unique and enables the best possible loudspeaker reproduction in the most challenging of sound environments,” says HHB sales director Martin O’Donnell. “Peter and his team did a fantastic job on the Olympics – we are very pleased that the Genelecs performed so well and delivered when it counted.”