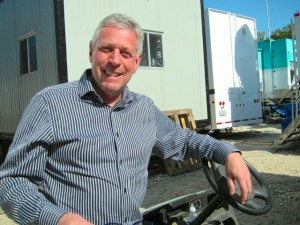 This past weekend’s Ryder Cup marked a 3D anniversary for Sky Sports as the 2010 Ryder Cup was also the first event to air on BSkyB’s 3D channel.  And while that first event showed the advantages of 3D golf coverage, this year’s event showed just how far 3D production techniques have come. Not only does the Sky 3D production team have two additional years of production experience but so does CAMERON PACE Group (CPG), which worked closely with Sky Sports on this year’s coverage. It was the first time the two companies worked together, and, from all accounts, the production went much better than expected.

“We felt that we would do exactly the same thing again this year, but the good thing is, we have learned a lot, and obviously CPG have learned a lot,” says Darren Long, Sky Sports, head of production. “And we have gained so much knowledge, and, although [we and CPG] have different ways of working, there is a common bond that has worked.”

Robin Broomfield, BSkyB, 3D development manager, oversaw a production that had 31 3D rigs on the course sending coverage back to CPG’s Shadowcaster 15 unit (where images were quality-controlled) and then on to Pacific, a new OB unit from Dome Productions being used for just its fifth event. Presteigne Charter supplied 3F wireless cameras.

“We’re a long way from home and not using the resources we have worked with for the past two years,” explains Broomfield. “But the CPG engineers and technicians are very professional and know what they are doing and what we are trying to achieve. And the Dome truck is an excellent HD truck to work in that is very similar to what we use in the UK, and we’ve definitely pushed it to its limits. But technically, it is very good, and the crew is absolutely great.”

The end result for Broomfield was a 3D look that was very similar to what the channel achieves in the UK.

“It was very easy for CPG to pick that up and make it work in the U.S.,” he explains. “And the technology and skills base have really moved on when you look back at where it was two years ago.”

Over the past 18 months, CPG’s philosophy has been to move toward a 5D production, where a single camera operator can control both the 3D and 2D camera (the 3D cameras are mounted on top of the 2D camera). While that would have been nice for the Ryder Cup, an aggressive time line required a side-by-side 3D production, although there was one Shadow rig on the sixth hole.

As for the CPG gear, Bruno Brunelle, CPG engineer, says that the newest weapon in the CPG 3D arsenal is a Camnet convergence controller that can be used to converge two cameras from one controller. 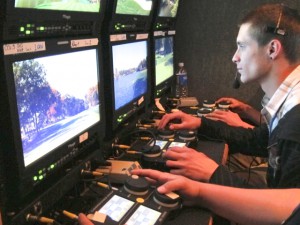 “As the systems get tighter and better, there is less need for alignment and tracking, so one operator can converge two or three cameras, and that offers a 50% savings,” explains Brunelle.

Also on hand was a new CCU (camera-control unit) that needs only strands of fiber to transport up to three camera signals for the Shadow rigs (the left and right 3D signals plus the third 2D signal).

“All the 3D adjustments take place in the Shadow unit, and then we send out a corrected stereo signal to [Dome’s Pacific OB unit] where they switch the show,” says Brunelle. “We also installed 3D monitors in the Dome truck and programmed the [vision mixer] for 3D.”

Also new this year was the use of EVS XT3 replay servers, with nine four-in and two-out units working across not only the 3D cameras but also the 2D interviews.

“We wanted to cover the stories we needed to make the coverage a success,” adds Broomfield.

The total camera complement included 28 3D fixed cameras and three RF cameras. The biggest change from Celtic Manor two years ago was the addition of a super-slow-motion camera shooting at 300 frames per second and the subtraction of a jib, crane, or pole camera. The addition was simply a result of the size of the HD productions being undertaken by Sky, European Tour Productions, and NBC Sports.

“We wanted at least one camera on every hole and greenside, either on towers or lower than the 2D host cameras,” explains Broomfield. “We also had some interesting fairway positions.” 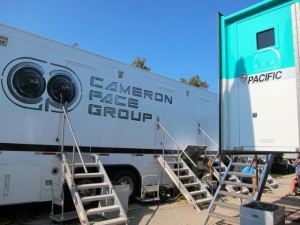 The CPG Shadowcaster 25 processed 3D camera signals before handing them off to Dome’s Pacific unit for final mixing.

The three RF cameras composed of two units based on the Sony TD300 cameras as well as one of the Panasonic AG-3DA1 camcorder. Presteigne Charter’s RF 3D technology, developed for Sky’s 3D coverage, runs two cameras down one RF channel. And some 2D camera shots (with a bit of pixel offset to create a 3D effect) were used as well for moments like tracking the flight of a ball or parts of the course where the 3D cameras could not get access.

“From a team perspective, we have the same one we had two years ago,” says Broomfield. “The core team from Telegenic is here as well as the stereographer, 3D engineer, deltratre graphics, and Presteigne Charter.”

Comparing this year’s coverage with two years ago, Broomfield says the biggest gains have been the speed at which the team can work.

“The technical side is much more streamlined, and the speed at which you can find errors and correct them is much faster than what we were doing two years ago,” he explains.

With the Ryder Cup, and another European victory, behind them, the 3D team at Sky returned home with new relationships with CPG and Dome that it hopes to revisit in the future. It also has more belief that the complexity of working in 3D continues to give way to simplified workflows that continue to lower the cost premium.

“It’s still more complicated than 2D because of the amount of hardware you carry around, with two cameras per rig,” says Broomfield. “But, from the setup and operational side, it is no different than a 2D operation.”

Adds Long: “It’s calm and feels like we are doing 2D, and every time we do an event now I don’t even think if it is 2D or 3D. It’s just an OB production and it just feels normal. It’s no longer lopped on and an awkward cousin.”