Sky Italia will launch a new “Super HD” service on 9 June to coincide with the start of the Euros, the first step on a road of innovation that will culminate in 2017 with the launch of a UHD service that offers viewers not only 4K resolution but also HDR. “Our opinion is that resolution is not enough to generate the wow factor for the customer,” says Massimo Bertolotti, Sky Italia, director of innovation and multimedia distribution. “With just resolution the consumer needs a bigger screen and also needs to be sitting at a shorter distance. But just a few percentage points of our customers have screens larger than 55 inches so we we don’t want to have a marginal innovation for just a few customers.” 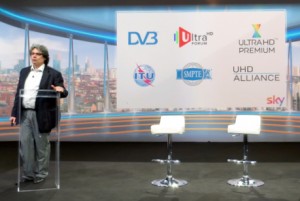 Massimo Bertolotti, Sky Italia, director of innovation and multimedia distribution, says that a 4K service without HDR is not good enough to be a real value proposition for viewers.

By waiting until 2017 Bertolotti says that Sky Italia will have more time for the production services market to mature (as well as production equipment) and also continue to work on a solution to convert SDR material to HDR.

“The current production in 4K has limited camera positions and switching between cameras is not the same as in HD,” explains Bertolotti. “So the experience in 4K today is not what the customer expects. But we can do something better with HDR, satisfy more people, and consolidate the market. So we now have one year to discuss, and create, the HDR ecosystem.”

While Sky Italia sorts out a move to UHD complete with HDR customers will be able to receive a next-generation service via the “Super HD” service to be launched next week.

“Super HD is standard HD in terms of content and resolution but the difference includes four elements,” says Bertolotto. “First, we will acquire the content at higher bit rates. Second, there will be a new filter to pre-correct the encoder. Next we will also correct and saturate the color a bit. And finally it will have a higher bit rate vs. a normal HD channel.”

At the unveiling of the new new service this week in Milan Sky Italia demonstrated a football match that was encoded at 18 Mbps vs. 9 Mbps. By delivering the HD signal at an average of 18 Mbps it’s believed that a number of picture benefits will become readily apparent to HD viewers. The new channel will also focus on sports content as non-live content will be available for Super HD via VOD.

The logic for the launch of a Super HD service meets up with the need to only roll out an innovation if it can benefit a large number of the subscription base. Another new service that can benefit a large number of subscribers is virtual reality and Sky Italia is also rolling out a new 360 video VR app that will include a wide range of content. And 360-video content will not only be available on dedicated VR headsets like Samsung Gear and Oculus Rift but also Google cardboard and even the Web so that people without a VR viewer can experience it.

“We are open to choosing different options to maximize the availability of the content,” says Bertolotti.