Sony banks on 4K at CEATEC show in Japan 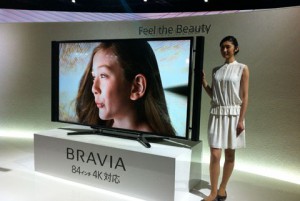 Sony’s 4K Bravia at the CEATEC show in Japan.

Sony is banking hard on 4K. At least that’s the company’s message at the CEATEC show outside of Tokyo this week: the company is displaying its new 84-in. BRAVIA 4K sets in a series of high-profile demos throughout its booth.

Despite the fact that the ultra-expensive television sets are likely years away from the mainstream market and the 4K production ecosystem is not yet ready for primetime, CEO Kaz Hirai is confident that Sony can serve as a leader in the adoption of 4K.

“I think, with the 4K television sets, the pricing right now is obviously not a mass-market proposition,” Hirai said at Sony’s CEATEC booth during a session with reporters on Tuesday. “But it is more of our message to the market about the leadership position that we’d like to take in the 4K market as well as making sure that we have a flagship product to really get 4K taking off in the right way.”

Hirai even went so far as to hint that new, more affordable Sony 4K sets could be on the way soon, paving the way for more-widespread consumer adoption of 4K. More-affordable sets could pave the way for an increase in demand for original 4K programming, and live sports is likely to be among the first sources of such programming.

“Obviously, this is not the only 4K product that Sony will bring out,” Hirai said. “We have plans for other 4K models as well, but we wanted to start out with a flagship model to make sure we sent a strong message about our commitment in 4K [technology].”

The 4K set also features a powerful side-speaker system with 50-W total output and 10-unit speaker system for virtual 5.1 surround sound. The side speakers are also detachable, allowing consumers to connect them to an existing home-theater system.

The BRAVIA 4K set is available to view in selected U.S. stores and will be available for purchase later this year priced at $24,999.99.

The 4K set is being showcased in various ways at Sony’s booth: a 3D demo, various side-by-side demos with a 2K set (including a wide shot of a landscape and a historic newspaper clipping), and a SimulView gaming demo (in which two-player games can be played concurrently by displaying two separate HD images and allowing each player to view their own screen through SimulView glasses).

Sony is also using the 4K sets to demonstrate its latest Personal 3D Viewer product. The device projects a movie-theater–like virtual experience (corresponding to 750 in.) directly to the user via a headset device incorporating two miniature OLED screens and headphones. The new model, the HMXZ-T2, is 20% lighter than the previous version.

Action Cam Gets Into the Game

According to a Sony rep at the booth, the Action Cam boasts the ability to capture higher-quality video in low-light situations as well as more-stable “steady” functionality than GoPro wearable cameras.

Odds and Ends
In other news, Sony stressed its enhanced cross-device connectivity with an array of interconnected products, such as its Xperia smartphones, Xperia tablet, VAIO PCs, and other devices.