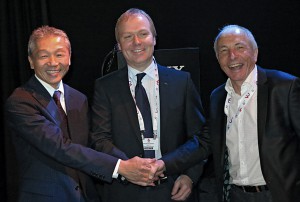 At the Sony press event at IBC2012: (from left) Katsunori Yamanouchi, vice president of Sony Professional Solutions Europe, and Niclas Ericson and Francis Tellier of HBS.

The broadcast technical plan for 2014 FIFA World Cup came into sharper focus at IBC. HBS, which is responsible for producing the host broadcast feeds for the event, has chosen Sony to provide outside-broadcast facilities and technical crews for all 12 venues during the 2014 event and one venue for the Confederations Cup next summer.

The core equipment requirements across the venues will call for 340 Sony HDC cameras (including 72 super-slo-mo cameras), 48 Sony vision mixers, 816 Sony monitors, and 280 staff. The technical setup will be similar to that for the 2010 World Cup in South Africa with facilities located in broadcast cabins rather than traditional OB vehicles.

The announcement was made at Sony’s IBC2012 press conference, with Niclas Ericson, head of FIFA’s TV division, and HBS CEO Francis Tellier taking the stage.

At this point, Sony’s role calls only for HD production facilities. The technology buzz at IBC is centered on 4K acquisition, but Tellier noted that the format is still years away from becoming a reality in the homes of viewers.

“If FIFA says they would like to shoot the final in Rio in U-HD, then of course we will,” he said. “But our duty to FIFA is to make it clear what is available now, tomorrow, and in 10 years, and we will not add to that confusion.”

As for 3D, Tellier said  FIFA is about to begin discussions with broadcasters about their appetite for 3D.

“We need to evaluate how much it will cost and whether it will be possible for FIFA to finance that,” he added. “It can end up as everything [in 3D], which is hard, nothing [in 3D], or one match a day [in 3D].”