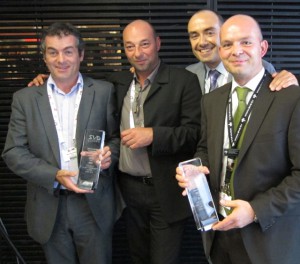 The SVG Europe IBC Technology Award on Sunday night brought more than 300 industry executives together for an evening of networking as it honoured three top achievements in sports broadcasting in 2012: The Olympics production efforts undertaken by Olympic Broadcasting Services (OBS), the BBC’s coverage of the Olympic Flame Torch relay that proved the use of cellular-based video transmission services with the help of Dutch technology provider Mobile Viewpoint, and UEFA’s use of the EVS C-Cast technology during Euro 2012.

The honourees were selected by the SVG Europe Advisory Council.

“This year’s recipients all helped move the sport production industry forward in 2012 and once again showed the pivotal role that sport production plays in developing new workflows and technologies,” says Ken Kerschbaumer, SVG Europe editorial director. “More importantly, the technologies and workflows can be used by all industry professionals, regardless of whether or not they are working in sport production.”

The work OBS did for the London Olympics earned top honours for Outstanding Production Achievement. Not only did an OBS staff of more than 5,000 people create 90 high-quality HD feeds covering the competition and interview areas but they embraced new tapeless workflows and also produced the most amount of live 3D and Ultra HD content in history. OBS also used more than 40 super-slow-speed cameras this year, another high water mark in sport production.

The winners of Outstanding Technical Achievement also spent their summer working hard to show how next-generation technologies are being used today. 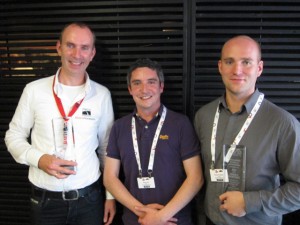 (l-to-r) Michael Bais of Mobile Viewpoint alongside Dave GIll and Chris Doherty of the BBC with their awards for Technical Innovation for work done on the BBC coverage of the Olympic Torch Relay.

EVS C-Cast at Euro 12: The EVS C-Cast system was introduced earlier this year as a way to help broadcasters automatically publish replay angles to the Internet without the need for reformatting and creating a second workflow. It was used at Euro 12 to to easily build a highlight light clip that synchronizes multiple camera angles and then makes them available to viewers using a tablet application that allows them to select their own angles. Segments were clipped from the live feed and then published, with up to five additional camera angles, within three minutes.

BBC Use of 3G Cellular Transmission for the Torch Relay: The BBC’s coverage of the Torch Relay managed to save a tremendous amount of money by relying on 3G cellular-based transmission systems to cover the 8,000 mile journey of the torch instead of traditional microwave or satellite systems. Developed with the help of Dutch company Mobile Viewpoint, the core of the installation was Mobile Viewpoint’s WMT (Wireless Multiplex Terminal), which incorporates the SIM card array. This works in conjunction with Continuous Picture Technology (CPT), which was developed by the BBC to produce a consistent, even video link for when the media vehicle is travelling through rural areas where mobile coverage is patchy.