talkSPORT and the art of taking sports commentary global

Admittedly, it’s a sports audio story and not a sports video one, but UK sports radio station talkSPORT’s recent deal to embed its commentary into an enhanced Twitter profile page highlights the global marketplace that IP technology is opening up. It’s not just about the podcast anymore… 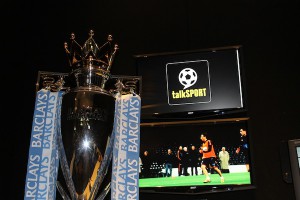 Scott Taunton, chief executive, tells a good story that illustrates all this too. As well as the Twitter integration the company recently signed a carriage deal with internet radio specialist TuneIn.

“A massive eye-opener with me is to watch TuneIn use a push notification in an individual territory and notice the boost to the number of feeds that go through,” he says. “For instance, they did one push notification in Mandarin to their subscribers in Taiwan for a Chelsea vs Man Utd Capital One Cup game. The result was that for that match we had more listeners worldwide listening to the Mandarin commentary than the English one.”

talkSPORT currently has a variety of English football audio rights (“The EPL originally was talking radio rights, but we were always very clear it was audio,” says Taunton) for all territories outside Europe, with Europe – excluding the UK & Ireland – to be folded in from next season. The company sees itself as a natural fit for social media.

“It works for the social media organisations as well,” says Taunton. “They can have content available to their subscribers that they may not otherwise find in an easy way. We may be in the dark old world of traditional broadcast media, but just domestically we have over 3m listeners a week and the average listener listens for 6.5 hours in that week. It’s the sort of engagement that a social media company would die for.”

The Twitter player is embedded using a piece of JavaScript which allows the audio stream and match details to be pulled across to a tweet by simply tweeting the link to the match page on talkSPORT.com. This renders the custom player and all the match information associated such as team names, kick off time and stadium. The audio is encoded in both AAC and MP3 to accommodate all devices.

There were challenges, which are outlined by Chris McCullough from Tibus, the digital agency that implemented the player: “Ensuring the player displayed correctly and played out on a variety of devices and operating systems from the most modern iOS devices to older desktop PCs. Furthermore, we needed to alter the Twitter Card code to accept the three different languages [English, Spanish & Mandarin] talkSPORT broadcasts in.”

Taunton declines to talk absolute numbers, but says that the company is getting traction in South East Asia and Africa where mobile devices are plentiful but the data distribution isn’t great. He also says, somewhat self-effacingly, that either “through luck or design” they are on target to hit their numbers for both of their first two seasons.

“The barriers are breaking down a bit,” says Taunton. “Social media recognises that traditional media has more content that they can get from elsewhere, and we realise that we need to be part of their space as well and engage with listeners via different means.

“Being platform neutral and distributing our content wherever people want to listen to it is the best approach to our business.”