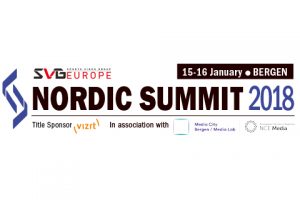 On January 15-16 2018 SVG Europe will join forces with NCE Media and Media City Bergen for its first-ever Nordic Summit. The venue for this event is the recently opened Media City Bergen complex in Norway, which has already made its mark as a leading international media cluster with Vizrt, Vizrt, Vimond, Mediability, Sixty, Highsoft, TV 2, NRK, Bergens Tidende, BA and the University of Bergen (Dept. of Information Science and Media Studies) among the key players.

The SVG Europe Nordic Summit will include an extensive tour of the Media City Bergen site as well as a half-day seminar programme including sessions on the development of the site, the present and future of broadcast sports graphics, the possibilities heralded by remote production, and a keynote conversation with Eirik Solheim, Strategic Advisor of Norwegian broadcaster NRK.

Attendance to this summit will be primarily geared towards SVG Europe’s Platinum Sponsors and invited delegates based in the Nordics.

1330-1410 Building Media City Bergen – The Inside Story
Media City Bergen has been a long time in the making, and from concept to completion was put together during an era when core technologies were evolving on a monthly basis. The result is one of the most technically advanced production facilities in the world, combining cutting-edge production environments, innovative manufacturers, and more. This session will explore the origins and objectives of this landmark development.
Presenters:
Anne Jacobsen, NCE Media, CEO
David Davies, SVG Europe, Editor

1545-1630 Nordic Broadcasters – Where Are We Headed?
Sports broadcasting in the Nordic region continues to evolve. The session will examine some of the critical questions including: How is OTT changing the role of broadcasters in Sweden, Norway, Denmark, and Finland? What steps are they taking to cut production costs and drive innovation? And should broadcasters across the region look to share technology and more?
Moderator:
Helge Høibraathen, Vimond, CEO
Panellists:
Marius Bjerke, TV2 Sumo, Product Director
Risto Koivula, MTV Oy, COO/CTO
Bjarne Andre Myklebust, NRK, Head of Distribution