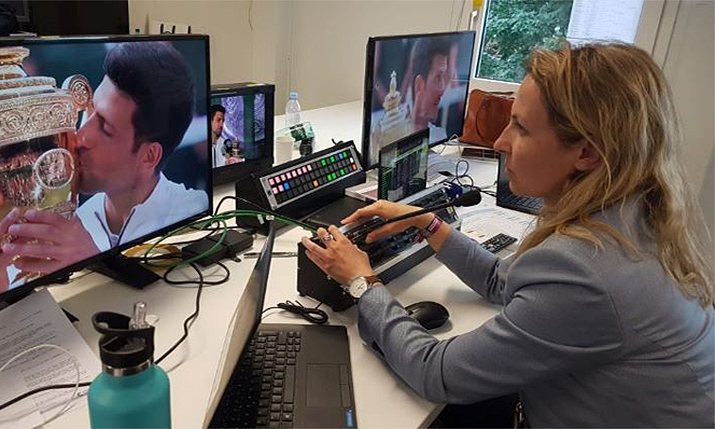 “Live tennis is fascinating as there are always new stories to tell. The unpredictability, the upsets, the newcomers,” says Aurelia Mounier, editor-in-chief at Eurosport.

Mounier’s career has been built around the tensions of the tennis court, which she thrives on. Storytelling from courtside involves a passion for the game, an understanding of the personalities involved, and an ability to move quickly to keep up with the twists and turns of the dramas playing out in front of the cameras.

Mounier goes on: “The biggest drama we saw recently was Novak Djokovic at the US Open. He was sure to win and from absolutely nowhere, he got upset and lashed out. And no one could’ve predicted what happened then with him being disqualified.”

“During a Slam, we are dealing with the event itself and after months of preparation it’s exciting to actually be there doing it altogether. At events, people are usually exhausted after ten days but it’s also so much fun”

Multitasking, spotting stories as they appear and managing her team is second nature to Mounier. She points to the Championships at Wimbledon as an example of how she has been able to not only make a great production work, but to be innovative and work on-the-fly.

“For Wimbledon, we have the rights in fewer markets compared to the Australian Open but in the past we have had a bit more freedom in [terms of] what we could do. When Coco Gauff beat Venus Williams in 2019, it was so cool as we were able to grab her and have her live on a mini-show at the end of the day. For the final, we had Simona Halep and Djokovic.

To read the full article go to: https://www.svgeurope.org/blog/headlines/game-set-and-match-eurosports-aurelia-mounier-on-the-fascination-and-drama-of-producing-live-tennis/