Match TV was one of three Russian Media Rights Licensees (MRLs) for the World Cup, as well as playing a major role providing facilities for external broadcasters.

Match TV is a Russian public sports channel that began broadcasting in 2015. The channel was created on the order of Russian President Vladimir Putin with the assistance of the editorial office of Gazprom-Media Holding. It was one of three rights holders in Russia for the 2018 World Cup alongside RTR (Russian State Television and Radio Broadcasting Company) and Channel One. 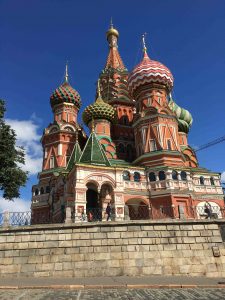 Match TV delivered free-to-air coverage of 30 games on its main channel and all games were available on its Match Ultra pay per view channel. The Match TV team was also responsible for construction of the broadcast presentation studio complex in Red Square, as well as providing unilateral facilities for overseas broadcasters such as NHK Japan.

Speaking from Moscow, Match TV Head of Video Production Technologies Stanislav Manakov told SVG Europe, “We provided studios for overseas broadcasters, including at Red Square, in Rostov and in Kazan. We worked closely with NHK – we helped them in different cities.

“We were the ones who put together the broadcast studio park in Red Square for Fox Sports, BBC Sport, Telemundo and others,” said Manakov. “We were in charge of the construction of those studios, which we started building back in April.

“Our own main presentation studio was at the Fan Zone near the Luzhniki Stadium, with a view of the stadium. We were linked by fibre from that studio to the IBC in Moscow. This was where we did our match presentation, with pre-game, half time and post-show analysis – talking to experts and specialists in different cities, discussing fair play, penalty decisions and VAR,” he said. “We also had a small studio in Saint Petersburg, near the stadium.

“We wanted to have a ‘feeling of presence’ across the match venues. We had 20 ENG crews on the road during the tournament, including 13 using TVU Networks units. These crews would be in the fan areas, talking to the fans in crowded areas, or in arenas with thousands of people on their phones.

“Other [fly-pack solutions] simply accumulate all the traffic from SIM cards in one common stream – but if one SIM card is working badly in that area or one operator is poor then the whole stream works badly. However, TVU divides the HD-SDI stream into five or six, and if one SIM card is working badly it doesn’t influence the whole stream. As soon as the equipment finds a new source it increases the bandwidth to the new source; you don’t need to restart and restore,” said Manakov.

“We used the TVU packs from June 9 right through to July 16. All the days we used TVU we were very pleased with its quality – more than happy.”

TVU Networks had over 150 pieces of equipment and local SIM Cards deployed in Russia to enable broadcasters to successfully deliver matches and tournament news to consumers across the globe.

This technology enables broadcasters to guarantee their top-tier connectivity at the event by being able to push a larger amount of data over the network. This results in better picture signal and ultimately, higher picture quality for viewers. Inverse StatMux Plus also combats network instability through intelligently monitoring each network connection in real-time, making corrections and adjustments as network conditions change.